The Milwaukee Bucks (34-20) take on the Atlanta Hawks (30-25) at State Farm Arena on Thursday at 7:30 p.m. ET in a battle between division leaders. The game is televised on TNT.

The Bucks roughed up the Minnesota Timberwolves in an afternoon game Wednesday, so they'll be playing on a quick turnaround. They have won each of the past two on the road, averaging 127.0 PPG. Defensively they have allowed just 96.0 PPG in the win streak.

The Hawks have rattled off three straight wins and covers, including a 108-103 win over Toronto in Tampa on Tuesday.

The total is set at 228.5 for this battle of division winners. The Bucks have alternated OVER and UNDER results in each of the past five outings, and the OVER/UNDER is 5-5 across the past 10 outings. The UNDER is 4-2 across the previous six for the Hawks. 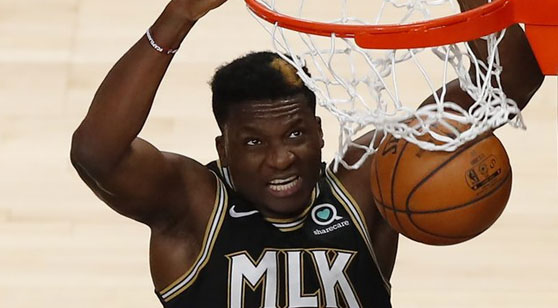 The Hawks return home off a pair of road wins as they battle the Bucks at State Farm Arena. (AP)

The Bucks blasted the Timberwolves 130-105 as a 10-point favorite on Wednesday afternoon as the OVER cashed, and they are 2-0 SU/ATS after a three-game losing skid against the likes of Charlotte, Dallas and Golden State.

The Hawks shot down to Tampa and picked up a 108-103 win as a 1.5-point underdog against the Toronto Raptors as the UNDER connected. Atlanta has won and covered three in a row, averaging 111.0 PPG across the past three while allowing just 104.0 PPG.

Milwaukee has been struggling a little lately, but part of the reason is that they have been nomads. The Bucks have been home just once in the past nine outings, and they're still 5-4 SU/4-5 ATS during the span.

Atlanta is back home for the first time since April 9 when they coasted past the Chicago Bulls 120-108 as a 2.5-point favorite as the OVER connected. They're 3-1 SU/ATS in the past four at home while the OVER has hit in each of the past two at SFA.

The first time the Hawks faced the Bucks they were roughed up at FiServ Forum in Milwaukee on Jan. 24. The Bucks won and covered 129-115 as 12-point favorites as the OVER (225) connected.

Despite that cover, Milwaukee is just 5-11 ATS across the past 16 meetings, and the OVER has hit in five of the previous six battles in Atlanta.

The Bucks have rolled up 119 or more points on offense in each of the past three outings. They pounded Minnesota 130-105 with six players going for 13 or more points. Khris Middleton led the way with 27 points, eight rebounds and seven assists, while Brook Lopez was good for 18 points and eight rebounds while blocking two shots in the blowout and cover.

Atlanta has been on fire, winning each of the past three while covering those games, too. They are also on a 7-1 SU/ATS heater in the month of April. Their lone loss was a 131-113 loss against the Memphis Grizzlies on April 7.

The Hawks are also 8-1 SU/ATS across the past nine home games dating back to mid-February while the UNDER is 5-1 in Atlanta's past six at State Farm Arena.

This is a great spot for the red-hot Hawks. They get the Bucks at home in a battle of division winners, and they could catch Milwaukee without Antetokounmpo. The Greek Freak practiced Tuesday, and was upgraded to questionable for Wednesday's game in Minnesota, but he sat again.

With or without Antetokounmpo is a big difference, but the Hawks should still be able to push past the Bucks, who come in on the second end of a back-to-back, traveling from Minneapolis while losing an hour changing time zones heading East. Teams love routines, and between playing an afternoon game on Wednesday, traveling, COVID-19 protocols and a quick turnaround, it's a tough spot for the Bucks.