Kristaps Porzingis will take on his former team for the fourth time Friday night in Dallas. The Mavericks will play host to the New York Knicks, who are riding a four-game winning streak ahead of this clash.

Both teams are looking to pick up a win in order to help their chances of finishing in the top six in their respective conferences, subsequently avoiding the play-in tournament that owner Mark Cuban and Luka Doncic have sounded off against in the last couple days. 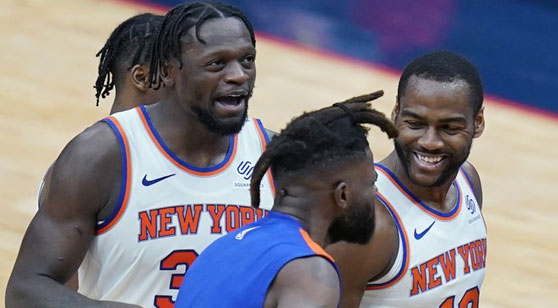 The Knicks are riding a seven-game ATS hot streak as New York heads to Dallas on Friday night. (AP)

The Mavericks won five straight games from the end of March through the first week of April. They won four straight road games in that stretch, including a 99-86 victory over the Knicks in Madison Square Garden two weeks ago.

Doncic led all scorers with 26 points in that game, as Julius Randle really struggled with 14 points on 5-20 shooting. Randle was able to record 11 assists and eight rebounds though.

It hasn’t been as great for Dallas since the Mavericks knocked off the Utah Jazz, 111-103 on April 5. They lost to Houston in their next game, and although they did beat Milwaukee by 15 points last Thursday, they followed that up with consecutive losses to San Antonio and Philadelphia.

Dallas should have lost to Memphis on Wednesday night too, but Doncic hit one of the most improbable shots you will ever see to beat the buzzer.