Non-conference NBA action will resume on Wednesday night with the Sixers set to host the Suns during the first matchup on NBATV’s nationally televised slate.

Phoenix enters Wednesday’s contest as a one-point favorite over the homestanding Sixers – marking just the second time Philadelphia has been listed as an underdog since the start of April.

The total for this event currently sits at OU 222.5, despite the previous three matchups between Phoenix and Philadelphia containing an average of 234 points scored in them. 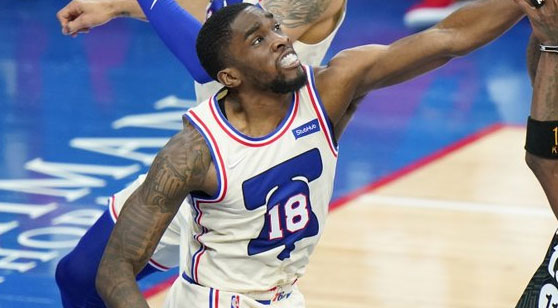 The 76ers have failed to cover in five straight home games as they welcome in the Suns on Wednesday night. (AP)

The Suns enter Wednesday boasting wins in four of their last five games – with Phoenix’ only loss during that timeframe coming in the matchup with the Spurs that Devin Booker and Chris Paul shot a combined 9-28 (32%) from the floor in.

Phoenix’ most recent matchup resulted in an overtime win over the Bucks on Monday night – as four different Suns’ players eclipsed 20 points during the Suns’ narrow defeat over Giannis Antetokounmpo and company. (Booker, Paul, Bridges, Ayton).

On the other hand, the Sixers had a four-game winning streak snapped by the Warriors in their most recent affair – as Steph Curry scored 49 points while knocking down 10-fo-17 long-range attempts on the way to his 11th consecutive 30-point outing.

Also, make sure to note that Ben Simmons and Tobias Harris both did not participate during Philadelphia’s loss to the Warriors on Tuesday night.

Phoenix has won three straight regular season matchups against the Sixers – with all three of these contests going over the total set for Wednesday’s affair (OU 222.5).

Joel Embiid scored 35 points on 12-of-23 from the field during Philadelphia’s latest meeting with the Suns. Embiid’s monster performance was negated in the loss by a 36-point performance from Booker though – who also managed to maintain a slightly more efficient clip from the field over the course of the contest (14-of-23).

The Suns enter Wednesday’s contest having won 12 of their last 14 games – currently giving Phoenix the second-best record in the NBA, which falls just one-and-a-half games behind the league-leading Jazz.

Betting the total in Suns’ games has been a roller-coaster ride this season – leading to the ‘over’ cashing in roughly 52% of their matchups so far this year.

Make note though, there has been some newfound consistency in scoring-volume during the Suns most recent stretch of games – considering the total has gone 'over' in nine of the last 12 contests containing Phoenix.

Now that Embiid is back in the lineup and appears to be playing at full-strength, the Sixers are back to winning games in dominating fashion – considering Philadelphia has now won four of its last five games, with half of those victories coming by 15 points or more.

Philadelphia consistently leaned towards the ‘over’ during the first half of the current season, as the new additions to the Sixers rotation led to slight skew in high-scoring results prior to the All-Star Break (20-16).

Since the start of April though, Philadelphia seems to have a slower approach to its offensive game plan – which has resulted in the total staying 'under' in eight of ten Sixers’ games since the latest calendar turn.

Booker is undeniably one of the premier talents in the Western Conference – currently averaging over 25 points per game on 48% from the field and 35% from beyond the arc this season.

The Suns’ superstar has fallen into a cold spell over the last week or so though – having scored less than 25 points in six of his last seven outings, with Booker’s largest scoring output during that timeframe being marked by a 27-point performance against a Washington team that plays virtually no defense.

I’ll back Booker to stay under that number again here, as he should have a tough time snapping out of his current slump against a Sixers squad ranking 2nd in defensive rating (106.6) and 4th in opponent field goal percentage (45.3%).

Since Embiid’s return from injury, the total has stayed under in seven of nine Sixers’ games – with Philadelphia’s only ‘over’ results during that stretch coming in matchups against weak defensive squads that play at fast tempos – Brooklyn and Minnesota.

On the other hand, Phoenix heads into Wednesday’s event after splitting over-under results in the last four games (2-2) – with the Suns’ most recent matchup against Milwaukee only going ‘over’ thanks to the 23 points those teams combined for in overtime.

I’ll back Wednesday’s Philadelphia-Phoenix matchup to stay 'under', as the Sixers will likely be forced to rely heavily on Embiid in this affair due to their crowded injury report – which should inevitably continue to slow down the pace of their games.