Eastern Conference NBA action will resume on Friday night with the Nets set to host the Celtics during the first matchup on ESPN’s nationally televised slate.

Brooklyn enters Friday’s contest as a five-point favorite over the visiting Celtics – marking the first matchup Jayson Tatum and company have been listed as an underdog since they squared off with Portland back on April 13th.

The total for Friday’s event currently sits at OU 226, as the Celtics have hit the 'over' in five of the past six games with a total listed at 225 or higher. 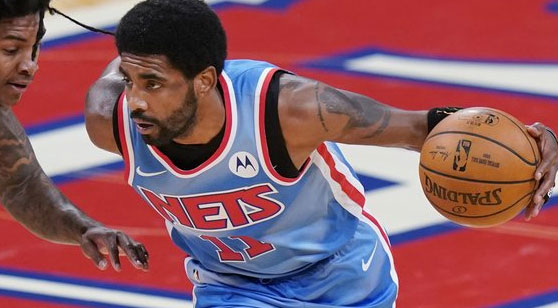 Kyrie Irving has led the Nets twice past the Celtics as Brooklyn squares off with Boston on Friday. (AP)

The Nets head into Friday’s event following losses in two of their last three games, with Brooklyn’s only victory across that stretch coming in a competitive matchup against the Pelicans.

Make note though, Kevin Durant played less than five minutes across Brooklyn’s previous two losses, and James Harden did not participate in either of them.

On the other hand, Boston heads into this contest boasting victories in six of the last seven games, with the Celtics’ only loss during that span coming in a tight matchup against Chicago – which was a game Tatum shot just 17.6% from the floor.

The Celtics’ most recent affair resulted in a victory over Phoenix last night, as Kemba Walker paced Boston with 32 points on 11-17 from the field during the double-digit win.

The Nets have reigned victorious in both of their regular season matchups against Boston this year – with both of those contests staying under the total set for Friday’s tilt (OU 232.5).

The first matchup between these teams was the uglier of the two contests, as Brooklyn walked away with a 28-point victory behind 37 points on 13-of-21 shooting from Kyrie Irving.

The most recent meeting between these teams was slightly more competitive than the first though, yet yet still resulted in a double-digit win for the Nets – as Irving paced Brooklyn with 40 points on 15-23 from the field during his second straight stellar outing against his former team.

Despite coming out of the gate at a snail’s pace to kick off the current season, the Celtics head into Friday finally bearing some momentum – with Boston claiming wins eight of the last 10 games, which includes impressive victories over the Nuggets, Blazers, Warriors, and Suns during that timeframe.

At the conclusion of March, the ‘over’ sat at a 25-23 clip in Celtics games – which actually ranked well above league-average in that department at the time. Since the onset of April though, the total has stayed 'under' in seven of 11 matchups containing Boston – bringing that clip down to 29-30 on the year.

Brooklyn has endured a revolving door of injury concerns throughout the course of this season, with the Nets’ issues heading into Friday’s matchup still being centered around the vacancies of Durant and Harden – which has led to losses in four of the last seven games for Brooklyn.

Betting the ‘over’ in Nets’ games has been one of the most consistent plays across the league this year – with the total going 'over' at a 35-24 clip in matchups containing Brooklyn so far this season.

Make note though, that trend has fizzled out lately – considering the total has stayed 'under' in six of the last 11 Nets’ games.

Boston enters Friday’s contest boasting victories in six of the last seven games, with the Celtics’ only loss during that span coming in a tight matchup against Chicago – which was a game Tatum shot 3-of-17 from the floor.

On the other hand, the Nets head into this matchup after splitting the first two games of Durant’s most recent absence – with the possibility of KD joining Harden on the sidelines for a third contest still hanging in the balance as Friday approaches.

I’ll take the points with Boston here, as Friday’s matchup should remain close throughout – even giving the Celtics a shot at a straight-up victory down the stretch.