Nikola Jokic is currently the odds-on favorite to be named the 2020-21 NBA MVP. Jokic has odds north of -350 as of April 22, and the only other player oddsmakers believe has a realistic chance of winning the award is Philadelphia's Joel Embiid.

If Jokic were to be named MVP, he would become the third European player (after Dirk Nowitzki and Giannis Antetokuonmpo) to win the award. Jokic will get another opportunity to prove his case on national television when his Denver Nuggets face the Golden State Warriors on Friday night. 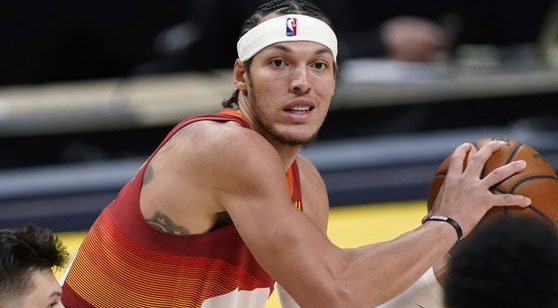 The Nuggets look to capitalize off their one-point win at Portland as Denver travels to Golden State on Friday. (AP)

Jokic isn’t the only potential NBA MVP that will be on the court though. Stephen Curry has been on fire in April. Curry scored at least 32 points in 11 straight games prior to Wednesday night’s loss to Washington. That has helped Golden State win six of its last nine games and put the Warriors in position to make the play-in tournament.

Golden State beat some pretty good teams during that run. The Warriors kicked it off by knocking off Milwaukee in early April, and they also defeated Denver and Philadelphia. However, they couldn’t beat the lowly Washington Wizards, losing to them twice in the span of 13 days.

Curry went cold from the floor in Golden State’s 118-114 loss to the Wizards on Wednesday night. He went just 7-25 from the field and Andrew Wiggins went 5-of-20 as the Warriors shot less than 40% from beyond the arc.

Denver has won 12 of its last 14 games. The Nuggets have continued to win games despite not having Jamal Murray, and it’s largely due to Jokic. However, one of those two losses came against Golden State 11 days ago.

Curry made history by surpassing Wilt Chamberlain as the Warriors’ all-time leading scorer in a 116-107 win over the Nuggets. He had his third 50-point game of the season against Denver, making 10 of 18 threes to lead Golden State to a win.

Jokic nearly had a triple-double with 27 points, 12 rebounds, and eight assists, but the rest of the team struggled aside from Michael Porter Jr.