The New York Knicks are poised to break their eight-year playoff drought in their first season under Tom Thibodeaux. They are the hottest team in the Eastern Conference, winning eight straight games to vault into the top six of the conference.

They have been excellent in Madison Square Garden with a 20-10 home record, and they will look to add to that when they face the Toronto Raptors on Saturday afternoon. Toronto is currently on the outside looking in at the playoff picture, but the Raptors have won four in a row to keep pace with the surging Washington Wizards. 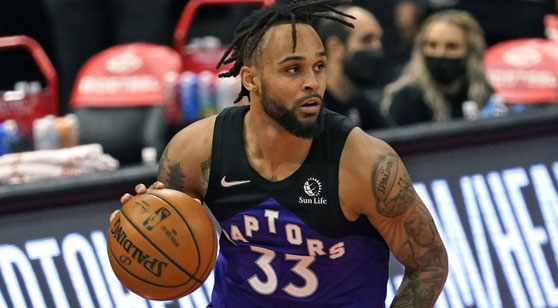 The Raptors have won and covered four straight games as they head to New York to face the Knicks on Saturday afternoon. (AP)

New York had lost five of six games before its current winning streak. The Knicks only victory in that stretch was a beatdown of lowly Detroit, but they started to turn things around with a comeback win over Memphis in overtime on April 9. They were trailing by six points with a little over a minute to play before R.J. Barrett took over in the final minute to pick up the win.

They followed up that victory by holding Toronto and the Los Angeles Lakers under 100 points, and they have since gone on to beat New Orleans (twice), Dallas, Charlotte, and Atlanta. However, the Knicks haven’t been totally dominant in this run as three of their eight victories came in overtime.

Their most recent victory was a 137-127 overtime win over the Atlanta Hawks on Wednesday night. Julius Randle led the way with 40 points, and Derrick Rose and Immanuel Quickley both came off the bench to score 20 points. Atlanta’s Clint Capela (22 rebounds) and Trae Young (14 assists) ended the game with gaudy stat lines, but the Hawks couldn’t get the dub.

It’s been a frustrating season for Toronto. The Raptors have been unable to play any of their games in Canada due to COVID restrictions, so they have had to make do in their home away from home in Tampa. They were 17-17 shortly before the All-Star Break, but they had an abysmal March where the Raptors won just one of their 14 games.

At that point, observers thought it likely the Raptors would deal Kyle Lowry and start their rebuild, but they stood pat at the trade deadline. That move didn’t look wise at first with the Raptors winning three of seven games to start April, but they have since won four in a row and beat title favorites Brooklyn 114-103 on Wednesday night.

The Nets didn’t have Kevin Durant or James Harden, so they had to give big minutes to Landry Shamet and others. Shamet went just 3-17 from the floor and picked up five fouls without contributing much else. Meanwhile, Toronto’s starting five thrived with Pascal Siakam and OG Anunoby playing well.

Siakam has been the best player on the Raptors since Kawhi Leonard left after Toronto won the NBA title in the summer of 2019. Siakam has played well this season with 20.9 PPG, 7.2 RPG, and 4.7 APG, but it has been tough for him to thrive as the top option in this offense at times. He is making just 45.4% of his field goals and 28.5% of his threes on the year.

Fred VanVleet is the second leading scorer on the Raptors. VanVleet has proved he isn’t just a hot hand off the bench and has grown as a player during his time up north. He is averaging 19.4 PPG and 6.1 APG on the season, but he is making less than 40% of his field goals.

Since being traded from Houston to Toronto at the conclusion of the 2011-12 season, Lowry has been one of the better point guards in the NBA. Lowry has been a consummate professional and a fan favorite with the Raptors too, and that played a part in the team keeping him at the deadline. He is near the end of his career, but he is still putting up decent numbers with 17.0 PPG, 5.5 RPG, and 7.2 APG.

Thibodeaux has the Knicks playing excellent defense, and that has fans reminiscing about the days of Pat Riley and Jeff Van Gundy. New York leads the league in scoring defense (104.7 PPG), three-point defense (33.6% shooting), and opponent shooting percentage (44.2%).

Offensively, Randle leads the team. He is having a great season as the centerpiece of the Knicks, leading the team in points, rebounds, and assists. He is making 46% of his field goals and 41% of his threes, and his overall play is much better than we saw during his first season in the Big Apple.

Veteran point guard Rose is playing well off the bench too. Injuries sidetracked a Hall of Fame career for the 2011 NBA MVP, but he can still contribute when healthy. Rose is averaging 13.3 PPG and 3.9 APG in 24 games, and he is an above average shooter too.

These teams split their two previous meetings this season. Toronto knocked off New York 100-83 on New Year’s Eve thanks to a nice game from VanVleet, but the Knicks won in this building two weeks ago. They beat the Raptors 102-96 as both teams struggled to hit their shots from beyond the arc.

The under is the best play on the board since neither previous game saw over 200 points scored. Neither team has very efficient shooters, while both teams play excellent defense. The game time won’t help either offense, so expect both teams to be sluggish.