Memphis picked up back-to-back wins in Portland, posting a 130-128 win as four-point underdogs on Friday, and a 120-113 win as 3.5-point underdogs on Sunday. Denver posted a 129-116 win over Houston, just missing a cover as 14-point favorites on Saturday, and they're 0-4 ATS across the past four outings.

The Nuggets head into this one as a 4.5-point favorite, and they're hoping the fifth time is a charm as they enter on an 0-4 ATS run. The non-cover skid started last Monday in a 139-137 overtime win in the Mile High City over the Grizzlies, while Memphis covered the 7.5.

Denver has rolled up some impressive point totals lately, going for 123 or more points in four of the past six outings, while the OVER/UNDER has split 3-3 for the Nuggs.

Memphis has posted 120 or more points in five of the previous six outings, all on the road, and they have hit the OVER in five of the past seven, including that game April 19 in Denver. 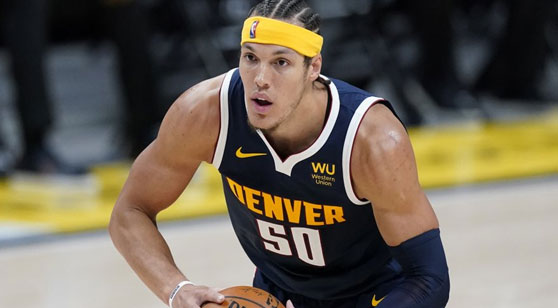 The Nuggets seek their third win over the Grizzlies this season when they meet Monday. (AP)

The last time the Grizzlies played, they won 120-113 in Portland as 3.5-point underdogs as the UNDER connected. Jonas Valanciunas was back from an eight-day absence due to concussion, going for 21 points and 10 rebounds in 30 minutes while adding two assists and two steals.

Dillon Brooks went for 18 points and eight boards, while Ja Morant filled up the stat sheet with 28 points, eight rebounds, three assists and two steals. Four of the team's starters, and five total players, posted two or more three-pointers, while hitting 12-of-23 (52%) from behind the arc.

Nikola Jokic was good for 24 points, 12 assists and eight rebounds with a blocked shot in the team's most recent game against the Rockets. The big star was Michael Porter Jr., as he rolled up 39 points with six rebounds, three blocked shots and two assists while dropping in eight triples.

Denver has won both of the previous two meetings, but they have won those games by a total of just three points. You can expect another razor-thin margin in this one, too, as Memphis has been playing great basketball of late.

In that most recent 139-137 overtime game, Xavier Tillman had 18 points and 14 rebounds with two triples, while Morant was good for 36 points, 12 assists and eight rebounds with a blocked shot. He was one of three players with 24 or more points on the Grizz roster.

Morant's performance was overshadowed by Jokic, who exploded for 47 points, 15 rebounds, eight assists and a blocked shot while hitting a ridiculous 20-of-31 from the field in 45 minutes.

The Grizzlies have lost just once in regulation in the past six outings, and they have covered seven of the past eight games overall while the OVER has hit in five of the past seven outings.

Memphis is a force to be reckoned with in the Western Conference, as they rank 11th in the NBA with 114.0 PPG, while hitting 47.0% to rank 12th in the league. They're also fourth in offensive rebounds with 46.2 boards per outing.

Defensively, the Grizzlies allow 112.5 PPG to rank 17th in the NBA, while allowing 46.5% from the field to rank 15th, or in the middle of the pack. If they're good in one particular area it's against the triple, allowing 36.6% from behind the arc to rank 13th.

The Nuggets have rolled up huge offensive totals, going for 115.5 PPG to rank fourth in the league, and they're second in the league hitting 48.8% from the field. They're also sixth with 38.3% from behind the three-point line, as they seem to do everything right offensively.

As far as the totals are concerned, the OVER is 4-1 in Denver's past five as a home favorite, and 5-2 in the past seven against teams with a winning overall record. The OVER is also 34-16-2 in the previous 52 at Ball Arena.

The Nuggets have won each of the first two meetings in this series, but the margin of victory is just 1.5 PPG. Both of the games have been amazingly close, and it has NBA fans hoping that these two teams will square off in the playoffs. What an amazing series that could be.

But first things first, we have a third installment of the regular-season series. Memphis should be able to keep it close, and they're catching more than two buckets. The best bet might be the OVER, however, as neither of these teams focuses too much on the defensive side of the floor.