The Milwaukee Bucks (37-23) travel to meet the Charlotte Hornets (30-30) at the Spectrum Center in Charlotte at 7 p.m. ET on Tuesday night. The game is nationally televised on NBATV.

The Bucks picked up a double dip sweep over the weekend against the Philadelphia 76ers, but they were dumped 111-104 on the road as 5.5-point favorites in Atlanta as the UNDER connected. Meanwhile, the Hornets have stormed back to .500 with back-to-back wins at home over the Cleveland Cavaliers and Boston Celtics. They spanked the C's 125-104 on Sunday, winning outright as eight-point 'dogs.

The Bucks are favored by nine points on the road, which might be risky business given the results of the last games for both sides. Milwaukee lost outright as 5.5-point favorites on the road last time out in Atlanta, while Charlotte came up with a big win as an 8-point underdog against Boston.

Charlotte hit the OVER last time out, and that slapped the brakes on a four-game UNDER run from April 18-23. In fact, their 125 points scored were their most since they dropped 127 points in a win on April 9 in Milwaukee, ironically enough. 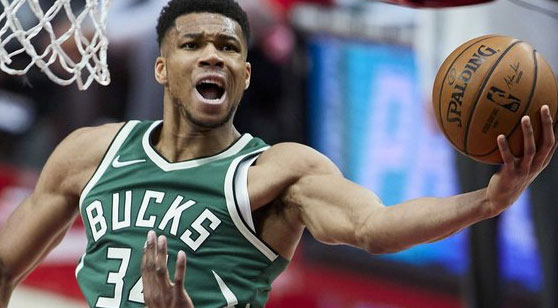 Giannis Antetokounmpo and the Bucks play with double revenge on Tuesday night against the Hornets. (AP)

Milwaukee got off to a decent enough start against Atlanta, leading 51-43 at halftime against the Hawks. They maintained that eight-point lead after three quarters, up 78-70, but they were outscored in the fourth quarter by 15 points, which is rare for the Bucks not to close out an opponent when leading late.

Giannis Antetokounmpo did his part, going for 31 points with 14 rebounds and two blocked shots while knocking down 11-of-17 from the field. Khris Middleton was also strong with 23 points and three triples, while Jrue Holiday was a solid tertiary scoring option with 19 points and 11 assists.

In Charlotte's spanking of Boston last time out, the Hornets hit 51% from the field, knocking down 47-of-93 shots, including 21-of-43 from behind the three-point line, or 49%. They were also an impressive 10-of-11 from the free-throw line. The Hornets had six players with double-digit point totals, including Terry Rozier with 21 points and 11 assists, while P.J. Washington exploded for 22 points, 12 rebounds, five assists and a blocked shot, while knocking down four triples.

The Hornets have just seemed to have the number of the Bucks lately, winning both games with a pair of covers. In their win on April 9, the Hornets had the luxury of missing Giannis, who was sidelined with an injury. In fact, the Bucks had a starting five of Thanasis Antetokounmpo, Bryn Forbes, Jordan Nwora, Bobby Portis and Jeff Teague, and that isn't going to cut the mustard most nights.

However, it is interesting to note that the Hornets have covered seven straight meetings at home against the Bucks, and four straight covers overall in this series.

As far as the totals are concerned, the Bucks have hit the UNDER in four of the past five road outings, and the UNDER is 5-1 in Milwaukee's past six on the road against teams with a winning mark at home.

Despite barely hitting triple digits last time out, the Bucks remains solidly atop the NBA's scoring list with 119.3 PPG, and they're second in three-pointer percentage (39.4%) and fourth in field-goal percentage (48.5%). If the Bucks struggle, they have managed to hit just 75.8% from the free-throw line to rank 24th out of 30 teams.

On defense, they rank 20th in the NBA with 112.9 PPG allowed, and they're 21st against threes at 37.4%. The Bucks are pretty solid overall in defensive field-goal percentage, however, allowing just 45.3%.

The Hornets have won and covered each of their past three at home since a stunning 103-90 loss at home against the Cleveland Cavaliers on April 14. Charlotte has managed to cover seven of its past 10 at home, while going 9-4 ATS in the previous 13 at Spectrum Center against a team with a winning road mark.

While the Hornets have had their way with the Bucks, as mentioned above, they have managed just a 1-8-1 ATS mark in their past 10 games against teams with a winning percentage over .600, and they're just 2-5 ATS in the past seven as an underdog. However, the Hornets are a very impressive 16-5-1 ATS in the past 22 games as a home 'dog.

The Bucks are hopeful that the third time is a charm as they invade Buzz City, but the Hornets are coming off an impressive home rout of the Celtics, while the Bucks were topped in the ATL after a fourth-quarter meltdown. It will be interesting to see if the momentum is carried over.

I LOVE the Hornets catching more than four buckets in this game, and they should be able to keep it within single digits, if not win outright. Charlotte is fighting to stay on that eight-line and get into the postseason. Milwaukee is just 5-5 across the past 10 games, spinning their wheels a little bit lately, and they're a very mortal 17-13 on the road this season.