Western Conference NBA action will resume on Wednesday night with the Clippers set to host the Suns during the final matchup on ESPN’s nationally televised slate.

Phoenix enters Wednesday’s matchup as a 3.5-point favorite over the visiting Clippers – marking just the fourth time Los Angeles has been listed as an underdog since the start of April.

The total for this event currently sits at OU 222.5, which is Phoenix's lowest total at home since April 17 against San Antonio. 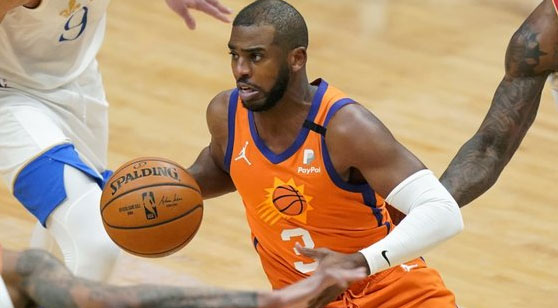 The Suns have lost twice to the Clippers this season as Chris Paul leads Phoenix against his former team on Wednesday. (AP)

Despite Kawhi Leonard sitting out with a foot injury during eight of the last nine contests, the Clippers head into Wednesday’s event on a 7-2 run across their superstar’s most recent stint of absences – with L.A.’s only losses during that period coming in tough matchups against the Sixers and Pelicans.

The Clippers most recent affair resulted in a 17-point loss at the hands of New Orleans, as the Pelicans ended up easily running away with a game that Los Angeles shot just 40% from the field and 14-of-45 from three-point territory in – which is very atypical for Paul George and company, even without the Claw on the floor.

On the other hand, Phoenix is finally coming home after withstanding a brutal five-game, Eastern Conference road trip – having consecutively matched up with the Bucks, Sixers, Celtics Nets, and Knicks away from the Valley over the last week and a half.

The Suns didn’t quite string together the winning performances needed to sweep their east coast road trip, but they did put forth a valiant effort under the extenuating circumstances – considering Phoenix managed to pick up wins in three of the five games during that period, despite trailing by double-digits in four of those matchups.

Los Angeles has reigned victorious in both of its matchups against the Suns this year – with both of those contests staying under the total set for Wednesday’s affair.

The first meeting between these teams was all about George, as L.A.’s secondary superstar erupted for 39 points while knocking down 7-of-10 three-point attempts on the way to a five-point victory for the Clippers, despite a horrid shooting night from his counterpart, Leonard (15 points, 4-of-21).

Leonard picked up the slack during L.A.’s second time out against the Suns though, which resulted in a heftier margin of victory for the Clippers – with the Claw posting 27 points on 50% from the field to go along with another 30-point performance from George in the double-digit win.

Despite the revolving door of injuries Los Angeles has endured this season, the Clippers head into Wednesday on an 11-2 SU run – with L.A.’s only loss that it failed to cover the spread in during that timeframe coming in a matchup against the Pelicans.

Riding the ‘over’ in Clippers’ games has been a popular trend for most of this season – leaving the total to set at a 28-20-1 clip prior to the start of April.