The Los Angeles Lakers are finally back at full strength. LeBron James made his long-awaited return to the lineup on Friday night, joining Anthony Davis on the court for the first time in nearly three months.

They weren’t able to get the win over Sacramento, but Lakers fans were delighted to see the two key cogs of last year’s title winner back together again.

Davis, James, and several other Lakers might not be available for Sunday night’s tilt with the Toronto Raptors though as head coach Frank Vogel doesn’t want to push his team too much before the playoffs. 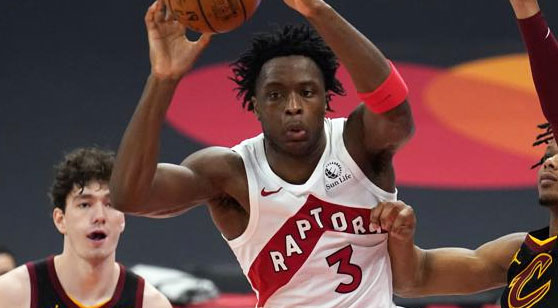 The Raptors continue their road trip on Sunday night with no rest as they battle the Lakers at Staples Center. (AP)

Los Angeles was in contention for the No. 1 seed in the Western Conference prior to the injuries to Davis and James, but the Lakers took a downturn after they were hurt.

They have gone 8-14 over their last 22 games, and that has led to the Lakers sliding out of the top four. They are currently battling with Dallas and Portland to finish in the top six in order to avoid the play-in round.

The Lakers have lost five of their last six games. They closed out their short homestand with a 14-point loss to Utah two weeks ago, and that was followed up with consecutive losses to the Mavericks in Dallas.

Los Angeles was able to knock off Orlando on Monday, but the Lakers fell to the Wizards on Wednesday and the Kings on Friday.

They had an 11-point lead with just under 10 minutes left to play in the game, but they couldn’t hold on in the end. The Lakers scored just 12 points in the last 10 minutes of action, allowing the Kings to come back and get the win.

Despite a valiant effort at one point, it looks like Toronto will miss out on the playoffs entirely after Washington’s surge. The Raptors started the season 17-17, but they fell apart in March with nine straight losses and 13 losses in 14 games during that month. They are now tied with the Bulls and three games behind the Wizards for the 10th spot in the East.

Toronto has now lost three straight games. The Raptors are in a brutal part of their schedule, and they hosted the Nets before going on the road to face the Nuggets and Jazz.

The 2019 NBA champions fell by double digits to Brooklyn and Denver, but Toronto was able to hang tough with Utah on Saturday night.

Fred VanVleet had 30 points for the Raptors in the loss. Bojan Bogdanovic led all scorers with 32 points for the Jazz, as they won without Donovan Mitchell available. Kyle Lowry missed the game for Toronto, but he is expected to play tonight.

Pascal Siakam leads the Raptors with 20.7 PPG and 7.1 RPG. Siakam is the most well-rounded player on Toronto, but he has really struggled from beyond the arc.

He is making just 29.5% of his threes, limiting the potential of this offense. We have seen Siakam struggle during the three-game losing streak, averaging 12.0 PPG while making just 31.1% of his field goals.

Only one Toronto player is shooting better than 40% from beyond the arc after the Norman Powell trade. OG Anunoby is hitting 40.1% of his treys to lead the Raptors in that category. Anunoby is averaging a career-high 15.8 PPG, as he continues to develop in this system.

The front office may kick itself for not trading Lowry at the deadline in a year or two. Lowry was seen as a potential asset for a playoff contender, and most observers thought he would be dealt to another team. He is averaging 16.8 PPG and 5.4 APG, and he is making 38.7% of his threes on the year.

James was favored to win the NBA MVP before his injury. James was having a great season, averaging 25.2 PPG, 7.9 RPG, and 7.9 APG. However, his long absence means he won’t be able to win his fifth MVP trophy. James’ fifth championship would mean more to the greatest player of this generation though.

We saw Davis return to the court last Thursday against Dallas. Davis hasn’t been his dominant self just yet, averaging 17.4 PPG while making 41.0% of his field goals with just 6.2 RPG in the five games he has been back.

The Lakers’ big man was averaging 21.6 PPG and 8.0 RPG in 28 games, but it’s hard to say just how good he’ll be in the postseason given the amount of time he has missed.

Montrezl Harrell is one of the few Lakers that isn’t listed on the injury report ahead of this game. Harrell has been very good off the bench in his first season with the team. He is averaging 13.9 PPG and 6.4 RPG, while making 62.5% of his field goals.

Harrell showed he can be an even bigger scoring threat when Davis was out, so we might see big minutes from him in this one.

Los Angeles knocked off Toronto 110-101 without Davis or James four weeks ago. Seven Lakers ended the game with at least 10 points, while Anunoby had an off night and left with an injury.

The Raptors shot a dreadful 15.2% from the floor, but they will do better this time around.