Western conference NBA action will resume on Monday night with the Lakers set to host the Nuggets during the final matchup on ESPN’s nationally televised slate.

Los Angeles enters Monday’s matchup as a 3.5-point underdog against the visiting Nuggets, which snaps L.A.’s four-game streak of being listed as a favorite.

The total for this event currently sits at OU 214.5 – marking just the 12th time since the start of February that the over-under for a Nuggets’ game has been set at 215 or below (45 games). 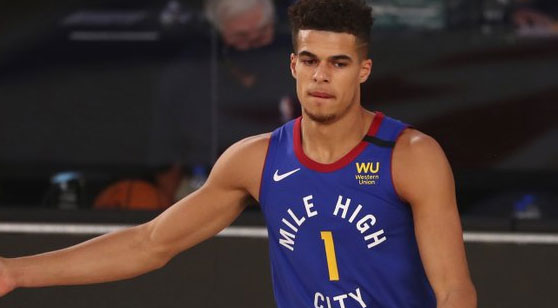 The Nuggets and Lakers have split a pair of matchups this season as they meet on Monday in a conference finals rematch. (AP)

The Nuggets head into Monday’s contest following wins in nine of their last 10 games – with Denver’s only loss during that timeframe coming in a matchup against the Warriors, in which Nikola Jokic forked up just 19 points on 7-of-16 from the field in.

Denver’s most recent affair resulted in an impressive road-win against the Clippers, as Jokic teamed up with Michael Porter Jr. for 55 points on a combined 19-of-33 from the field during the Nuggets’ upset victory over Kawhi Leonard and company as 5.5-point 'dogs.

On the other hand, Los Angeles enters this event riding an ugly three-game losing streak – which includes defeats at the hands of the Wizards, Kings, and Raptors over the last five days.

Various excuses have been made for the Lakers over the last few months – considering both of their superstars, and others, have been consistently hampered with injuries during that timeframe, and Los Angeles has looked far from a finished product.

The return of L.A.’s superstars didn’t breed immediate success like many believed it would, considering the Lakers have lost both games since the return of LeBron James.

It is only a matter of time though, before the Lakers return to the high-caliber level of play we have become accustomed to seeing from them.

Denver and Los Angeles have split a pair of matchups so far this season – with the first of those contests staying under the total set for Monday’s affair (207 points), and the second cruising over that number (227 points).

The first matchup between these teams resulted in a victory for Los Angeles, as seven different Lakers’ players eclipsed double-digit scoring on the way to a 21-point win for King James and company.

The Nuggets bounced back with a double-digit win of their own in the second meeting between these teams though – as Jokic led the charge for Denver with a monster triple-double of 23 points, 16 rebounds, and 10 assists during the victory.

Despite Jamal Murray’s unfortunate season-ending injury, the Nuggets have still managed to gain ground in the Western Conference standings following the loss of their secondary superstar.

Part of the reason the gap has narrowed between Denver and the top teams out west can be attributed to Utah struggling while Donovan Mitchell remains sidelined with an ankle injury.

Some of it can also be attributed to the Nuggets playing solid basketball over their most recent stretch though, considering the Nuggets come into Monday riding a five-game winning streak – to build upon what has been a 14-3 SU month of April thus far.

Betting the ‘over’ in Nuggets’ games has been one of the most consistent plays across the league this year – with the total going 'over' at a 35-29 clip in matchups containing Denver so far this season.

Make note though, that trend has fizzled out lately – considering the total has stayed 'under' in five of the last seven Nuggets’ games.

The defending champs come into Monday’s event owning a record of 36-28 on the year, which puts them 10 games out of the top spot in the west – currently positioned seventh in the conference.

Betting the ‘under’ in Lakers’ games has been one of the most profitable betting trends in the league this season – with the over-under currently sitting at a 25-39 clip in matchups containing Los Angeles over the course of their current campaign.

Make note though, the oddsmakers have aggressively scaled down the totals in Lakers’ games since the trend became prevalent – which has led to ‘over’ results in nine of their last 14 contests.

With Murray being forced to miss the rest of the season due to an ACL injury, Porter Jr. has been asked to assume a large portion of Denver’s offensive workload in the meantime – leading to performances of 23 points or more in six straight contests, while putting up 28 or more during half those outings.

I’ll back Porter Jr. to go over that number again here, as I expect Denver to lean on him a little more than usual in a matchup against the Lakers where buckets will come at a premium.

When fully healthy, I still believe Los Angeles is the best team in the NBA – despite what the Lakers have showed us following the return of their superstars.

If LeBron and Davis both get confirmed to play here, I think this is an ideal spot to hop on the Lakers – as head coach Frank Vogel’s squad should be eagerly searching for a victory over a quality team in the nationally televised spotlight to silence their latest critics.