The New York Knicks (36-28) continue its road trip against the Memphis Grizzlies (32-31) at FedEx Forum in Memphis on Monday night at 9 p.m. ET.

The Knicks spanked the Rockets in the opening game of their six-game road trip, but things get a lot more treacherous after a cupcake game to start the sojourn. The Grizzlies were stunned on the road by the undermanned Orlando Magic on the road Saturday, losing outright as 11.5-point favorites. Memphis is on a 1-3 SU/ATS cold snap.

The Grizzlies are favored by nearly two buckets against the red-hot Knicks despite the fact they're coming off a disappointing straight-up setback in Orlando as double-digit favorites. Memphis have been rather erratic on offense, and they have been equally erratic on defense. They allowed 112 points last time out in Orlando after topping the Magic 92-75 as 12.5-point favorites in the front end of the back-to-back set.

The Knicks are finally legit, and they're not only likely to make the playoffs, they could make a little noise for the first time in decades. But first things first, they need to tick off wins on the regular against contenders, and it speaks volumes about how the books feel about them that they're still an underdog in this one. 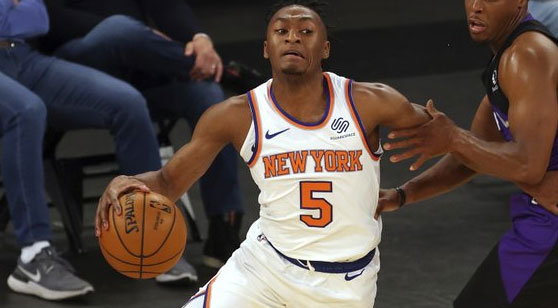 The Knicks travel to Memphis on Monday night looking to pull off a sweep of the Grizzlies. (AP)

The Knicks polished off the Rockets by a 122-97 count as 10-point favorites to successfully start off the six-game road trip. New York outscored Houston in every quarter, including by 10 points in the first quarter. That's what bettors who bet the favorite like to see.

Julius Randle went for 31 points, seven rebounds and six assists while hitting four three-pointers. R.J. Barrett went for 21 points, while Derrick Rose dropped 24 off the bench. Overall, the Knicks hit 52% from the field, and 51% from behind the three-point line, good for 18-of-35 from behind the arc.

The Grizzlies fell 112-111 to the Magic in O-Town as 11.5-point favorites, failing to carry over the momentum from their 92-75 win in Memphis over the Magic.

Memphis had four players in double digits, led by Jonas Valanciunas with 11 points, 16 rebounds and three blocked shots. Dillon Brooks was one of three players to hit at least 21 points, leading the team with 23 points overall. The Grizzlies hit 46% from the floor, 44-of-96, and they dumped in 10 triples.

The first game was a lot of fun, as the Knicks outlasted the Grizzlies by four points in overtime. Memphis had six players in double digits for points in a losing effort, as Valanciunas was good for 20 points, 14 rebounds and three blocked shots. Brooks hit for 23 points, while Ja Morant rolled up 26 points with four three-pointers, six assists and a blocked shot.

The Knicks also had six players in double digits, with Barrett and Immanuel Quickley racking up 20 points apiece. Rose continued his resurgence with 19 points off the bench, and Alec Burks was also good for 19. Five players hit at least two triples, and the Knicks finished 44% from behind the arc, good for 14-of-32.

The Grizzlies have managed a 1-3 SU/ATS mark across the past four outings, but overall their record against the number lately has been pretty good. Memphis has cashed in 11 of the past 14 games at FedEx Forum, while covering in 18 of the past 25 games overall. The Grizzlies are 10-3 ATS across the past 13 games as a home favorite, too, while hitting ine nine of the past 12 against winning teams. And while the Grizz didn't cash in Orlando as a big favorite, they're still 15-7 ATS in the past 22 when favored.

The Knicks have won 11 of the past 12 games overall, and they kick-started the winning ways with a 133-129 overtime win over the Grizzlies at Madison Square Garden on April 9 as the OVER (216) connected. New York has taken on all comers lately, recording impressive wins over several contenders, looking like a team capable of going deep into the postseason if they keep up this rate.

The Grizzlies have struggled lately, losing three of the past four while going 1-3 ATS during the span. The also failed to cover last time against the Knicks as slight favorites, losing on the road in overtime. Memphis is also 3-5 SU/4-4 ATS across the past eight outings. Back the team which has been a lot hotter, and believe it or not, as hard as it is to believe, it's the Knicks who are the hottest team in the NBA.