The Toronto Raptors (27-38) wrap up their road trip with a battle against the Los Angeles Clippers (43-22) on Tuesday at 10 p.m. ET at Staples Center. The game is nationally televised on TNT.

The Raptors picked up a 121-114 victory as 10-point underdogs against the Los Angeles Lakers on this very same court on Sunday, and they have covered in each of the past two games.

The Clippers are on a three-game losing skid, including a 110-104 setback against the visiting Denver Nuggets on Saturday as 5.5-point favorites. The UNDER connected for the fifth consecutive outing, while failing to cover in each of the past four contests.

The Clippers are favored by more than four buckets in this home battle against the Raptors, who are playing in the final contest of a four-game road trip. Toronto is looking for the Los Angeles sweep after surprising the Lakers by a 121-114 score as 10-point underdogs, serving as another cautionary tale why you should never back a heavy favorite on the money line. It's just not a good long-term betting strategy.

Prior to their win over the Lakers, the only win for the Raptors since April 21 as a 112-96 victory against the Cleveland Cavaliers. The 121 points for Toronto was its most since dropping 135 points in a 20-point win in Cleveland on April 10 as three-point underdogs.

The total is set at 221.5. The Raps hit the OVER in the most recent outing against the Lakers, but they haven't hit the OVER in consecutive games since April 14-16. The Clippers are coming off an UNDER against the Nuggets, and they have gone under in five straight outings. 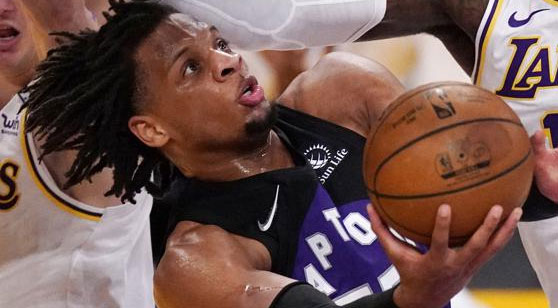 Toronto goes for the L.A. sweep at Staples Center on Wednesday night when the Raptors battle the Clippers. (AP)

The Raptors used a 40-21 second quarter to push ahead of the Lakers, taking a 72-59 lead at halftime. They kept the Lakers are arm's length all night, hanging on for the 121-114 win. The Clippers lost for the third straight outing, falling to the Nuggets 110-104, and they have failed to cover in four in a row.

The Clips had five players in double digits in that loss to Denver, but they didn't shoot particularly well. Paul George really struggled, hitting just five of his 21 field-goal attempts. Yes, he finished with 20 points and seven rebounds, but it was a struggle. The only effective starter was Kawhi Leonard, who hit 7-of-12 to finish with 16 points, six assists and five rebounds with a pair of triples. DeMarcus Cousins was also sharp off the bench, going for 16 points on 6-of-9 shooting in 14 minutes.

The Raptors were covering for all but a minute or two in Sunday's win over the Lakers. Pascal Siakam and Kyle Lowry were a tremendous one-two punch. Siakam went for a game-high 39 points with 13 rebounds, four assists, two steals and two blocked shots while making 15-of-26 from the field, while Lowry dropped in 37 points with 11 assists on 12-of-20 shooting. Overall the Raps hit 42-of-94 (45.0%) from the field, including 15 three-pointers.

This is the first meeting of the season, as they teams will also meet in Tampa next Tuesday. The way the Clippers handled them last season, the Raptors were probably quite glad not to have to face L.A.

The UNDER hit in each of the two meetings last season, and that's been the theme when these two teams get together. The UNDER is 5-1 across the past six meetings, and 13 of the past 17 battles at Staples Center between the Clips and Raps have cashed UNDER.

Overall, the Raptors are 7-3 ATS across the past 10 games, and they're 4-1 ATS in the past five when working on a day of rest. However, Toronto is just 3-8 ATS in the past 11 games against teams with a winning straight-up record, while cashing in three of the past 13 games on the road.

The OVER has hit in 17 of the past 25 games on the road for Toronto, while connecting in seven of the past 10 as an underdog.

Los Angeles has hit the skids with three straight losses to New Orleans, Phoenix and Denver from April 26-May 1 after a four-game win streak. The Clippers have failed to cover in each of the past four, too, while hitting the UNDER in five consecutive outings.

The Raptors pulled off the upset of the Lakers in the front end of their two-game stop at Staples Center, but they're not going to sneak up on the Clippers. Yes, L.A. is really struggling lately, dropping three in a row, but they're primed for a breakout game against a team limping to the finish line of its road trip.

Los Angeles has dominated this series in the past, with the UNDER cashing on a rather frequent basis, too. Why mess with what has worked in the past?