The New Orleans Pelicans (31-37) continue its road trip to face the Memphis Grizzlies (34-33) at the FedEx Forum on the banks on the Mississippi River on Monday at 8 p.m. ET.

The Pelicans are coming off a thrilling 112-110 win on the road against the Charlotte Hornets on Sunday, and UNDER bettors are still smarting from that one. New Orleans and Charlotte combined for 185 points through three quarters, so it looked like the OVER (224) was just a formality. But then the teams went on to combine for just 37 points in the final 12 minutes, with the Pels outscoring the Hornets 23-14.

The Grizzlies are looking to keep up their winning ways after posting a 109-99 victory in Tampa against the Toronto Raptors, cashing as 6.5-point favorites as the UNDER hit for a second consecutive outing.

The Grizzlies opened as a 9.5-point favorite at most shops, and the money has been coming in on the home side. Most shops now have Memphis favored by double digits.

As far as the total, it has varied a little, too, going from 223.5 to 225.5. With New Orleans, they have seen plenty of OVER results this season. While the OVER is 35-32 this season for the Grizz, it's an impressive 40-28 for the Pels this season. The 40 OVER results are the most in the Western Conference, and second in the NBA to 41 OVER results for the Indiana Pacers. 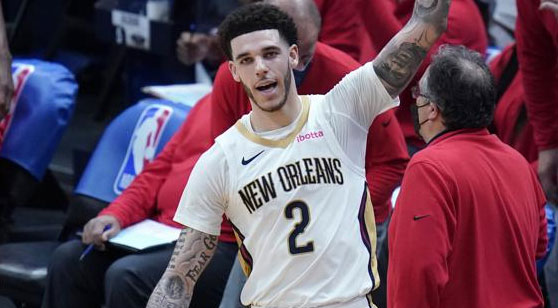 Lonzo Ball and the short-handed Pelicans seek their third win over the Grizzlies this season when they meet on Monday. (AP)

As mentioned above, the total was a raw deal for the Pelicans on Sunday. New Orleans did cash as a three-point underdog while hitting the money line at +110 in Buzz City. The Pelicans had six players go for 13 or more points, including 24 points with 11 assists and three triples from Eric Bledsoe. Willy Hernangomez was the big-timer in the frontcourt, going for nine points, 16 rebounds and a blocked shot in 22 minutes.

The Grizz felt right at home in Tampa, pushing past the Raptors 109-99. It was a balanced attack, as seven players scored in double digits. Jonas Valanciunas was the big start with 18 points, 21 rebounds and four blocked shots in 36 minutes on 9-of-15 shooting. Overall the Grizzlies hit at a 45% clip from the field, or 38-of-85, while dropping in 14 three-pointers.

The Pelicans have had the number of the Grizzlies so far this season, but they have the unenviable task of traveling to Memphis on short rest after playing in Charlotte the night before. They lose an hour coming back to the Central Time Zone, too.

New Orleans has posted a 5-0 ATS mark across the past five meetings in this series, while hitting the UNDER in 13 of the past 16 trips to Grind City.

As mentioned above, the Pels are coming in with no rest. New Orleans is 5-2 ATS across its past seven when playing on no rest, and the UNDER is 6-2 in the past eight games when playing in the second end of a back-to-back situation.

For Memphis, they have had their hands full with the Pelicans, but they have been hot against everybody else. Memphis is a very impressive 20-9 ATS across its past 29 games overall, while hitting at a 10-4 ATS clip in the past 14 as a home favorite. The Grizzlies are 11-4 ATS in the pat 15 games overall at home, too.

The Grizzlies have had their way against the number when facing losing teams, too, going 12-4 ATS in the past 16 against teams with a losing overall record, and they're 21-7 ATS in the past 28 when working on one day of rest.

As far as the total is concerned, like New Orleans, it's all about the UNDER for Memphis. The UNDER is 34-14 in the previous 48 at the Forum, while going 22-10 in the past 32 as a home favorite. The UNDER is also 10-3 in the past 13 against teams with a losing overall mark.

In the previous two meetings, the Pelicans won and covered against the Grizzlies. But I don't like the lack of rest with the quick turnaround for New Orleans, but I also think they can keep it within single digits. I think the Grizz finally get it done straight-up in a lower-scoring game in Memphis against the visitors from NOLA.

Go with the 5-0 ATS Pelicans trend in this series, and roll with the UNDER trend in the past 16 meetings in Memphis, which is 13-3. This game won't be mistaken for a lockdown defensive game, but we will see the UNDER just come in, too.