The Utah Jazz are closing in on clinching home court throughout the NBA Playoffs. Utah is currently the only team in the league with 50 wins, and the Jazz are looking to hold off Phoenix and Philadelphia over the final week of the regular season.

Heading into Monday night’s games, the Jazz are two games up on the Suns and three games up on the Sixers. Their toughest remaining test will come tonight when they head to the Bay Area to face the Golden State Warriors. 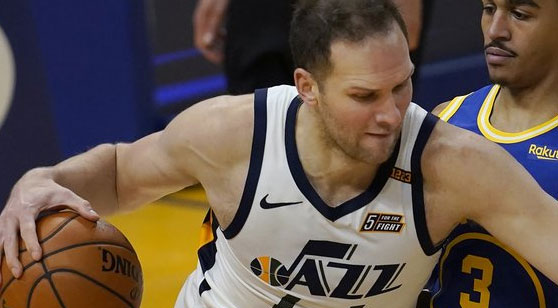 The Jazz and Warriors have split a pair of matchups this season as the Western foes meet on Monday. (AP)

Golden State would ensure themselves of a spot in the play-in tournament with a win. The Warriors are looking to beat out the Memphis Grizzlies for the No. 8 seed though, as that would give them two chances to make it to the actual playoffs.

Golden State will have the advantage of playing their last four games at home, but they will face Utah, Phoenix, New Orleans, and Memphis.

They have won four of their last five games coming into Monday night. Golden State took advantage of a weak stretch in its schedule with two wins over Oklahoma City, and victories over Houston and New Orleans. Their most recent blowout over the Thunder on Saturday night was one of their biggest triumphs of the season.

The Warriors hammered the Thunder, 136-97 behind 49 points from Stephen Curry. It was Curry’s sixth straight game with at least 30 points. Draymond Green helped by dishing out 13 assists as Golden State shot 58% from the field and 50% from beyond the arc.

Utah has been the best team in the NBA since January. The Jazz weren’t great in April with a 9-7 record last month, but they have won five straight games to start May on the right note. All five of those games were in Salt Lake City, and the Jazz will go on the road for three of their last four tilts.

In their last game, the Jazz held off the Rockets, 124-116. Kenyon Martin Jr. and Khyri Thomas combined for 54 points for Houston, but Utah had a more balanced effort. Georges Niang led the Jazz with 24 points in the win.

The Warriors lost to the Jazz, 127-108 back on January 23. Curry led all scorers with 24 points, but the Jazz had six scorers in double digits while the Warriors had just three.

Golden State got the upper hand on Utah two months ago though. Rudy Gobert had 24 points and 28 rebounds, but Curry and Andrew Wiggins teamed up for 60 points.

Utah has been without Donovan Mitchell for the last three weeks because of an ankle injury. Mitchell is the team’s leading scorer and will miss this game too, so the Jazz will need scoring from other sources, especially with Mike Conley also sitting out.

Sixth Man of the Year contender Jordan Clarkson has provided a lot of scoring off the bench. Clarkson is averaging 17.7 PPG for the Jazz, and while he hasn’t been as efficient as he was at the start of the season, he is being tasked with carrying more of the offense. He has scored at least 21 points in three straight games.

Center Rudy Gobert is averaging 14.3 PPG and 13.3 RPG. He has only scored 20 points or more nine times this season, as he is primarily used as the defensive lynchpin.

However, Bojan Bogdanovic has showed that he can score in bunches. Bogdanovic has been superb over the last seven games with at least 20 points in each outing.

The Jazz are one of the most well-rounded teams in the NBA. They rank first or second in most defensive categories, and they rank third in three-point percentage and scoring offense.

Curry is set to beat out Washington's Bradley Beal to lead the NBA in scoring for the second time in his career. His 31.9 PPG is a career-high for the veteran guard, and he continues to shoot the lights out.

Curry is making 48.7% of his field goals and 42.9% of his threes on the year. He has now hit at least 40% from beyond the arc in eight of his last nine games despite shooting a ridiculous number of threes.

The absence of James Wiseman, Kelly Oubre, and Eric Paschall really puts the pressure on Golden State’s other starters to step up.

Wiggins has answered the call somewhat, although he hasn’t been an effective three-point shooter the last several weeks. He is averaging 18.3 PPG while making 47.3% of his field goals, and he has scored at least 18 points in six straight games.

Of course, the player the Warriors really want to step up is Green, who is having one of the weirdest seasons in recent NBA history with more rebounds (7.1 RPG) and assists (8.8 APG) than points (6.8 PPG).

Green started off ice cold from the floor, but he has regained confidence in his shot over the last month. The nine-year veteran shot 48.5% in April.

Golden State takes (and makes) a ton of threes. The Warriors rank fifth in the league in both three-pointers attempted and made this season. That has been the source of their success since Curry joined the team, and he is taking almost a third of their treys.

The absence of Mitchell and Conley will be too much for the Jazz to overcome on Monday night. Curry will have another 30-point game in a Golden State victory.