Non-conference NBA action will resume on Tuesday night with the Lakers set to host the Knicks during the final matchup on TNT’s nationally televised slate.

Los Angeles enters Tuesday’s matchup as 5.5-point favorite over the visiting Knicks, which snaps the Lakers’ four-game streak of being listed as an underdog.

The total for this event currently sits at OU 213.5 – marking the lowest over-under set for a Knicks’ game since they squared off with Toronto back on April 24th (O 213). 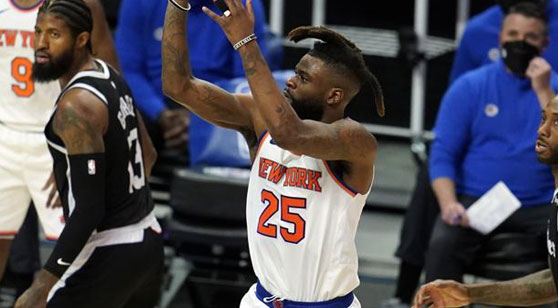 The Knicks seek their second win at Staples Center in three days as they square off with the Lakers on Tuesday night. (AP)

After wrapping up a 12-1 SU run to close out the month of April, New York heads into Tuesday’s contest following losses in two of the last three games – with both the Knicks’ losses during that timeframe coming by a double-digit margin (Phoenix, Denver).

New York bounced back during its most recent affair against the Clippers though as Reggie Bullock and Derrick Rose teamed up for 49 points on 55.8% from the field on the way to a six-point victory for the Knicks.

On the flip side, the Lakers rebounded from a two-game losing skid with a double-digit victory over Phoenix in their latest affair as Anthony Davis went off for 42 points on 13-of-27 from the field during LeBron James’ fourth consecutive absence.

Los Angeles comfortably won both of its matchups against the Knicks last season, as the Lakers cruised to victories by eight points or more it both affairs behind solid performances from James and Davis.

The Lakers’ superstar duo remained on the sidelines during the latest matchup between these teams though, and New York managed to take full-advantage of the opportunity as Julius Randle racked up 34 points on 13-of-23 from the field, while the Knicks defensive unit held Los Angeles to less than 100 during New York's double-digit victory in The Big Apple.

Despite posting losses in two of their last three games, the Knicks have put together a solid campaign compared to recent seasons – currently sitting in fourth place in the Eastern Conference standings with a record of 38-30, which has earned New York the best record against the spread across the entire NBA (43-24-1).

Similar to Los Angeles, betting the ‘under’ in Knicks’ games has been a somewhat trendy play this season – with the total going 'over' at a 31-37 clip in matchups containing New York, which ranks second across the conference in that department.

That trend of low-scoring affairs seems to have fizzled out lately though – considering the total has gone 'over' in 10 of the last 15 Knicks’ games.

Even after L.A.’s gutsy victory over Phoenix on Sunday night, the defending champs head Tuesday owning a record of 38-30 on the year – currently staring down the barrel of a first-round play-in series if the season were to end today.

Fortunately for the Lakers though, their season does not end after tonight and it appears things are finally beginning to look up for head coach Frank Vogel’s team – considering King James is expected to make his return from an extended absence any day now and the Lakers have been playing ‘okay’ without him lately.

Betting the ‘under’ in Lakers’ games has been one of the most profitable betting trends in the league this season – with the over-under currently sitting at a 26-41-1 clip in matchups containing Los Angeles over the course of their current campaign.

That trend of low-scoring affairs seems to be picking up steam lately too – considering the total has stayed under or pushed in five of the last seven Lakers’ games.

The level of success New York has experienced this season, as a team, has come as a surprise to many, but the way Randle has sprung onto the scene for the Knicks might be the most least expected part about it – with the Kentucky-product averaging roughly 24 points and 10 rebounds on the year, which earned him his first All-Star honors.

During his first matchup against Los Angeles this season, Randle threw up 34 points on 13-23 from the field on the way to a double-digit victory for the Knicks.

I’m going to back him to stay 'under' here though, as Randle has now scored less than 25 points in three straight games and I have to imagine Davis is going to ramp up the intensity at the defensive end of the floor after seeing how Randle cooked them last time out.

The Knicks head into Tuesday’s contest following double-digit losses in two of their last three games – with New York’s only victory during that timeframe coming in a six-point win over the Clippers, which is a squad coasting comfortably within its playoff position.

On the other hand, the Lakers enter this event after posting an emphatic, bounce-back win over the Suns in their most recent affair – as Davis carried Los Angeles to victory with a spectacular 42-point performance during King James’ fourth consecutive absence.

I’ll lay the points with Los Angeles here, as there’s still a slight chance for the Lakers to dodge a first round play-in series if they get some help down this homestretch – and I believe AD and company will continue to do everything in their power to take advantage of that potential help.