The Washington Wizards (32-37) play the second of a two-game set against the Atlanta Hawks (38-31) at State Farm Arena on Wednesday night at 7 p.m. ET. The game is nationally televised on ESPN.

The Wizards, clinging to the 10th seed and a play-in spot in the Eastern Conference, were tripped up 125-124 in the front end of the set on Monday night. Washington covered the eight-point number, and nearly won outright, as the OVER (237.5) easily connected.

Despite the loss, the Wizards remain three full games above the Chicago Bulls with three to play. They simply need to win one of their final three games to eliminate the Bulls from postseason contention.

The Hawks are favored by six and a half points at home in the second end of the back-to-back. The Wizards picked up the cover on Monday night, and they nearly pulled off the straight-up victory at +210. As it stands, the loss didn't harm postseason chances, as they simply need a win in the next three to punch their ticket to the play-in round. 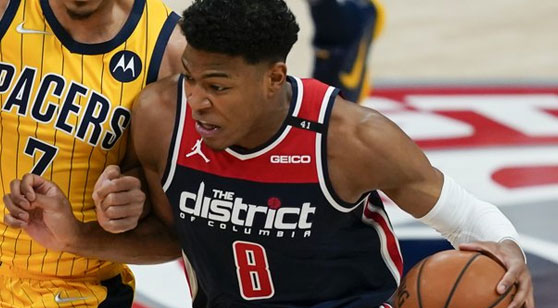 The Wizards have covered seven of their last in the underdog role as they face Atlanta tonight. (AP)

The Wizards connected against the spread, and they're 1-1-1 across the past three, while going 6-1-1 ATS in the previous eight outings. Washington's offense has been on point lately, while their defense hasn't been anywhere to be seen. They have coughed up 125 or more points in each of the previous six outings.

The Hawks failed to cover last time out, but they have won four of their past five games overall. As such, they're in a three-way tie in the standings with the Miami Heat (38-31) and New York Knicks (38-31) for the fourth spot in the Eastern Conference. With the win, the Hawks moved to 22-11 at home, and 22-18 in the conference.

The Wizards have struggled against the Eastern Conference this season, going 14-25 vs. East, while also going 15-20 on the road.

The Hawks have picked up a pair of straight-up wins against the Wizards, while splitting against the number.

The Wizards had six players with 12 or more points, with Russell Westbrook doing his thing. He posted 28 points with 21 assists and 13 rebounds with just three turnovers in his 40 minutes for yet another triple-double.

The Wizards have been on fire against the number, going 7-1-1 ATS across the past nine games on the road, while going 4-0 ATS in the previous four as a road underdog. In addition, they have covered the number in each of the past six against teams with a winning overall record.

The Hawks have been ridiculous against the spread lately, with some eye-popping numbers.

Both of these teams have a lot at stake in this game, as the Wizards are playing to extend their season, while the Hawks are trying to secure home-court advantage in the first-round of the playoffs. This should be a good one.

Look for the Hawks to get the win, with the Wizards keeping it close and covering, similar to what we saw in the front end of the set. In addition, defense hasn't exactly been a hallmark for either of these teams, and we'll see more end-to-end action with another OVER result when the dust clears.