The Philadelphia 76ers (47-22) takes on the Miami Heat (38-31) at American Airlines Arena in South Florida Thursday at 7:30 p.m. ET. It's a potential second-round playoff matchup in the Eastern Conference depending on how the seeding shakes down, and you can see it nationally televised on TNT.

The 76ers enter this one looking to bounce back from a 103-94 loss at Indiana on Tuesday night, failing as 5.5-point favorites while the UNDER (233.5) cashed. That loss snapped an eight-game win streak for the Sixers, and they were 6-2 ATS entering play.

The Heat made a statement in Boston on Sunday, and again on Tuesday, sweeping a two-game set to deal the Celtics a huge blow, while also alerting the rest of the Eastern Conference that Miami is a force to contend with, similar to their run in the NBA Bubble last summer.

The 76ers opened as a favorite by a bucket, perhaps due to the fact they swept the Heat in a two-game set earlier this season. But Miami is playing with a lot of confidence lately, and they're 2-1 SU/ATS in the past three as an underdog.

Conversely, Philadelphia failed to win, let alone cover, as a 5.5-point favorite in Indiana last time out, and they're 1-2 ATS in the past three as a favorite. 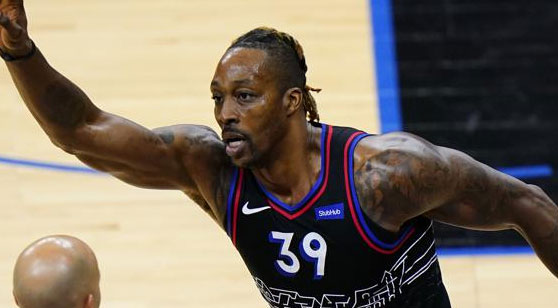 Dwight Howard and the 76ers make their first trip to Miami this season looking for their third win over Miami. (AP)

The 76ers were dropped 103-94 in Indiana on Tuesday as 5.5-point favorites, snapping an eight-game win streak and 6-2 ATS run. The 94 points actually tied a season low, a mark they hit on three other occasions, all losses and non-covers, as one might expect.

Ben Simmons did his best to will the team to a win, hitting 9-of-16 from the floor for 20 points, eight rebounds, seven assist and two steals, while Tobias Harris had a team high 27 points, but the big performers were few and far between on a rare off night.

The Heat, meanwhile, had no such problems in Beantown. They swept a key two-game set, and the offense was efficient and balanced. Bam Adebayo and Duncan Robinson led the way with 22 points to lead the starters, while Tyler Herro had 24 off the bench, including four triples, while adding 11 rebounds for the team's only double-double. Goran Dragic also hit four threes, ending up with 17 off the pine.

Overall, Miami hit 59% from the field, 53% from behind the arc and 77% from the free-throw line, while dumping in 129 points. They also had 43 rebounds to just 32 for Boston in Game 2, winning despite losing the turnover battle by three. The latter is an area they need to improve going forward.

It's hard to believe, but these teams haven't faced each other since mid-January, when the Sixers swept a two-game set in Philadelphia. In the first game, it was a great one, ending with a 137-134 overtime victory in favor of the home side, while Miami easily cashed the 8.5-point number.

In the second game, Philly rolled to a 125-108 win as 7.5-point favorites. The OVER came through in each outing, and the OVER has cashed in five straight meetings in this series since an UNDER result Nov. 23, 2019 in Philadelphia.

Miami won both meetings at home last season before the COVID shutdown, going 1-0-1 ATS. The OVER also hit in each meeting at AAA. The OVER has cashed in four straight in South Florida since an UNDER on March 8, 2018.

Philadelphia was won eight of their past nine games, and they're a respectable 6-3 ATS during the span, coming off a loss and non-cover in Indianapolis on Monday as the UNDER connected.

The Sixers have alternated the UNDER and OVER in each of the past six games, and the UNDER has edged the OVER 6-4 across the past 10 outings.

Philly has had some issues on the road, at least against the number. They're 3-3 SU in the previous six tries on the road, but they have covered just twice during the span. The UNDER is also 9-3 across the past 12 on the road for Philadelphia.

The Heat is, well, heating up, at just the right time, eliciting thoughts of last season when they made a run to the NBA Finals in the Central Florida bubble. Can you feel the Heat? Down in your soul?

Miami has won and covered three in a row, and they're 6-1 SU/5-1-1 ATS across the past seven outings, making a run for home-court advantage in the first round of the playoffs.

In addition, Miami has cashed the OVER in 10 straight, making total bettors very happy at the window. That includes five straight OVER results at home.

Both of these teams are playing good basketball, so this is going to be a great game. In fact, it might be a preview of the second round of the Eastern Conference playoffs if things break the right way. That would be an amazing series, as Jimmy Butler would get a crack at his former team.

First things first, though. Miami took care of business in both home meetings last season, and they'll keep up the good work against a Philly team which has been rather middling on the road lately. Look for a high-scoring game, too, as Miami is all about the OVER lately.