The winner of Sunday afternoon’s game between the Golden State Warriors and Memphis Grizzlies will be the No. 8 seed in the Western Conference.

Both teams are gunning for that spot because the No. 8 seed will have two chances to make the playoffs while the No. 9 seed will have to survive an elimination game before a winner-take-all second game.

The winning team will take on either the Los Angeles Lakers or Portland Trail Blazers for the No. 7 seed on Wednesday night. 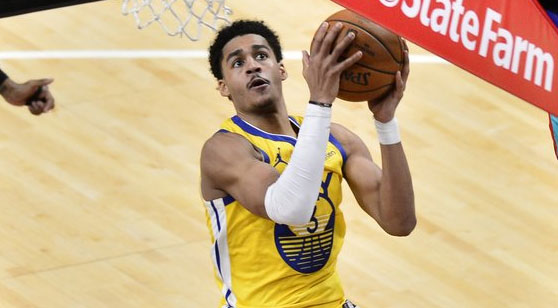 The Warriors and Grizzlies are tied for the eighth seed heading into Sunday's contest at the Chase Center. (AP)

Golden State is entering the postseason on a high note. The Warriors have won five straight games and seven of their last eight in order to stay level with the Grizzlies.

Stephen Curry has been exceptional during this run, and we have seen Andrew Wiggins and Jordan Poole light it up in the Warriors’ last two games.

Wiggins was electric in Tuesday night’s win over Phoenix. He went 17-of-24 from the floor to lead all scorers with 38 points. His performance was needed as Curry went just 1-of-11 from beyond the arc.

It was Poole’s turn to take over on Friday night against New Orleans. Curry sat out with a bruised tailbone, so Poole led the way with 38 points on 12-of-22 shooting against the Pelicans. Mychal Mulder went 7-of-13 beyond the arc for 28 points too in Golden State's 125-122 victory.

Memphis has won five straight games too. The Grizzlies looked likely to fall out of the top eight with losses to Orlando and Detroit in early May, but they responded with a win over Toronto in Tampa before closing out their home slate with four straight wins in five days.

They dealt a death blow to the Pelicans’ postseason hopes last Monday, and they followed that up by throttling Dallas, 133-104 the following night. Memphis had a day off on Wednesday before edging Sacramento by six points on Thursday and a single point on Friday.

The Kings are largely going through the motions at this point. They sat most of their best players on Friday night, but Louis King came off the bench to score 27 points. However, Justise Winslow had 25 points and 13 rebounds to lead the Grizzlies to the win.

Ja Morant is the leader of Memphis’ offense. The No. 2 overall pick in the 2019 NBA Draft was last season’s Rookie of the Year, and he leads the Grizzlies in points (19.2 PPG) and assists (7.4 APG).

Morant has been a solid shooter inside the arc, but he has had a hard time hitting threes. Morant is making just 30.6% of his treys on the season, and that doesn’t bode well for Memphis entering the playoffs.

The return of Jaren Jackson Jr. has given this offense more options. Jackson needed some time to get his legs back under him, but he has been shooting well over the last week.

The former Michigan State standout is only making 28.3% of his threes though, and that’s rather alarming after he knocked down 39.4% of his triples last season. We have seen him struggle with fouls too, picking up 3.7 fouls per game.

Jonas Valanciunas has been the most reliable player on the team. Valanciunas is averaging 16.9 PPG and 12.5 RPG, and his four offensive rebounds per game are one of the highest totals in the league.

The Grizzlies' big man is making 58.8% of his field goals, and he is the most efficient scorer despite not getting to the free throw line as much as he should given his size.

Curry is currently 22 points ahead of Washington’s Bradley Beal in the race for the NBA scoring title. Both players have made it known they are out to top the league in that category, but Curry will know how many points he needs against the Grizzlies since the Wizards are taking on Charlotte at 1 p.m. ET.

Curry made at least 40% of his threes in his first five games, but he went 4-of-24 from beyond the arc against Utah and Phoenix.

Wiggins is averaging 18.6 PPG. He is hitting 47.6% of his field goals and 37.7% of his threes. He sat out of Friday’s game with a knee injury, but he is expected to take the floor on Sunday afternoon against Memphis.

Since Wiggins doesn’t provide much else other than scoring, it’s important that he is efficient from the floor with Kelly Oubre Jr. sitting out with a wrist issue.

Golden State is finally getting more out of Draymond Green on offense. Green leads the team in rebounds (7.1 RPG) and assists (8.9 APG), but he is averaging just 6.9 PPG. However, he has scored at least 11 points in three straight games, making at least 50% of his field goals each time out.

Both previous meetings between these teams happened on consecutive nights in March at FedEx Forum in Memphis.

Golden State knocked off Memphis 116-103 on March 19, as Wiggins led the way with 40 points. The Grizzlies got the upper hand the following night though despite an off night shooting from Morant.

Curry didn’t play in either previous game, but he will be on the floor this Sunday. The two-time NBA MVP will be the difference maker in a Golden State win.