The Charlotte Hornets (33-39) and the Indiana Pacers (34-38) square off in a play-in game Tuesday night at 6:30 p.m. ET at Bankers Life Field House in Indianapolis. The game is nationally televised on TNT.

The Hornets limp into this game having lost their past five games, although three of those losses came by five or fewer points, and one of their other two losses came in overtime. Still, they're just 4-8 ATS across the past 12 games.

The Pacers closed the regular season with a 125-113 win in Tampa against the Toronto Raptors, and they won three of their final five games to get into a position to host this play-in game. Indiana has also been cover kings, going 6-0-1 ATS in the final seven, with the OVER cashing in the final three.

The Pacers are favored by just three, and that seems a bit low considering how both of these teams finished the team. At times, the Hornets looked a bit disinterested, and they certainly didn't do anything in the final two weeks which resembled a playoff team. The Pacers, on the other hand, certainly looked the part.

Indiana lost its final two games at home, which might be reason for the low number, but those losses came against the defending champ Los Angeles Lakers and the hopeful future champ Milwaukee Bucks. And the Pacers covered in each of those two losses as home 'dogs.

In fact, Indiana is 6-0-1 ATS in the past seven games, and the last time they failed to cover was May 5 against the visiting Sacramento Kings. The OVER is also 4-1 in Indiana's past five games at home. 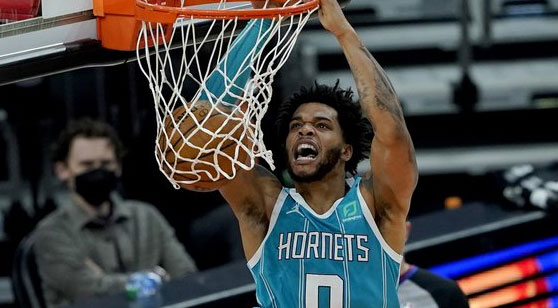 The Hornets took two of three meetings from the Pacers as the teams meet up in an elimination game on Tuesday. (AP)

The Pacers used balanced scoring in the final in Tampa against the Raptors, as six different players registered 12 or more points, including Oshae Brissett with 31 points and 10 rebounds with five triples. That was surprising, but the performance of Domantas Sabonis was not. He has been a regular, steady contributor, and he posted 25 points with 16 rebounds and three steals on 12-of-18 shooting.

The bench was strong for Indiana, too, and depth will not only be important in the play-in, but for the rest of the team they're alive if they are to advance. T.J. McConnell was good for 12 points and 17 assists in 40 minutes off the bench, and the Pacers hit 15 three-pointers while hitting 51% overall from the field.

The Hornets really stumbled down the stretch, but they have been keeping it fairly close. They had a five-point loss in Washington last time out. Charlotte did feature seven different players in double digits in points, including a 22-point effort from Terry Rozier. In fact, T.R. flirted with a triple-double, posting nine rebounds and nine assists, too. Get him on the court, and he's trouble.

While Charlotte only lost by five points, they were dismal shooting the rock. The Hornets hit just 39%, or 37-of-94, and they were only 31% from the perimeter, or 14-of-45. Their saving grace was a 22-of-24 night from the charity stripe, as everyone looked like Steph Curry from the free-throw line. That wasn't characteristic, as they were 21st in the NBA at just 76.1% from the line during the season.

The Hornets won the final two meetings after the Pacers on the first installment, but these teams haven't met in some time.

In the most recent battle, Charlotte won in Indianapolis by a 114-97 score, as the Pacers turned it over 20 times to just 10 times for the Hornets.

The Hornets have been ice-cold against the number, cashing in just one of the final seven games. They're also a dismal 2-6 ATS in the past eight as an underdog, while going 1-6 ATS in the previous seven as a road 'dog. However, they're a solid 24-10-1 ATS in the past 35 against teams with a losing record.

The Pacers have been cover kings lately, going 6-0-1 ATS in the past seven games overall. They have especially enjoyed the home cooking, covering the number in each of the past five at BLFH in Indy. In addition, they're 4-1-1 ATS in the past six as a favorite, too.

As far as the total, Indiana has been quite the opposite to Charlotte's impressive UNDER trends. The OVER is 10-3 in Indiana's past 13 games overall, and 4-1 in the past five at home. The OVER is also 21-8 in their past 29 games while working on a day of rest. The UNDER is 3-0-1 in their past four against losing teams, however.

I don't think teams can flick a switch on and off, and will trust a red-hot team over one which is ice-cold any day of the week. That doesn't sound like amazing expertise rather than just common sense. But the truth is, Charlotte has looked disinterested lately, and very disjointed, but Indiana has been on point and covering on a regular basis.

Therefore, the easy call here is to play Indiana to win by at least two buckets. It's rather surprising they're not laying at least five points here. In addition, it's been all OVER all the time for the Pacers, but this one will likely end a shade UNDER, which has been the case when these teams get together.