For the second straight season, the Memphis Grizzlies are involved in a play-in game in the Western Conference.

Last season in the Orlando Bubble, the Grizzlies needed two wins over the Trail Blazers to advance to the first round of the playoffs, but Memphis fell short against Portland in the first contest.

This time around, the Grizzlies will be back at home taking on the San Antonio Spurs as the winner faces the loser of the Lakers/Warriors matchup for a shot at top-seeded Utah in the first round. 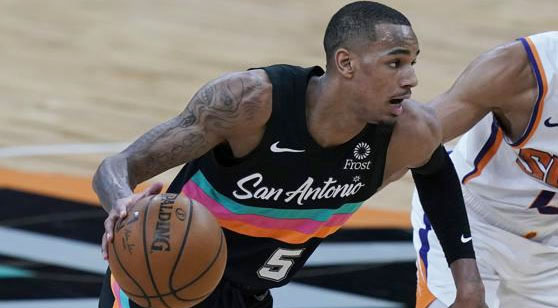 The Spurs travel to Memphis on Wednesday night looking to advance in the play-in tournament. (AP)

San Antonio is ice-cold heading into the play-in tournament, as the Spurs are riding a 2-11 slump the last 13 games, capped off by consecutive home losses to the Suns.

Gregg Popovich's team actually owned a better road record than home mark this season as the Spurs went 19-17 away from the AT&T Center.

The backcourt carried the load for the Spurs this season since the release of veteran forward LaMarcus Aldridge, who eventually signed with the Nets then abruptly retired.

DeMar DeRozan put together his 8th consecutive season of averaging at least 20 points per game by posting 21.6 ppg this season, while Dejounte Murray put up a career-high 15.7 ppg for San Antonio

The Grizzlies had an opportunity to finish as the 8th seed in the Western Conference, but Memphis couldn't hold onto a one-point lead in Sunday's 113-101 defeat at Golden State.

That loss snapped a five-game winning streak for Memphis, although four of those victories came against non-playoff teams (Sacramento twice, Toronto, and New Orleans).

Last season's Rookie of the Year Ja Morant led Memphis in scoring with 19.1 ppg, while dishing out 7.4 assists per contest.

Dillon Brooks (17.2 ppg) and Jonas Valanciunas (17.1 ppg) also put up career-bests in scoring for the Grizzlies, who slumped to a 2-6 ATS mark in the final eight games as a home favorite.

The Spurs picked up only one win against the Grizzlies this season, but it did come at FedEx Forum in the season opener prior to Christmas, 131-119. DeRozan scored 28 points for the Spurs, although half those points came from the foul line.

Memphis swept San Antonio in a two-game set at AT&T Center in late January/early February. In the 129-112 blowout on January 30, seven different Grizzlies scored in double-figures, while Memphis shot 17-of-35 from three-point range.

In the next matchup two days later, the Grizzlies rolled the Spurs, 133-102 as Memphis has nine players in double-figures although no player posted more than 19 points. The Over finished a perfect 3-0 in the three meetings.

The Spurs reached the playoffs in 22 consecutive seasons before falling short last season. San Antonio needs two victories to get back into the postseason, but will have to play better on the road to do so.

In spite of San Antonio finishing with a winning road mark on the campaign, the Spurs stumbled to a 1-7 record in the final eight away contests with the lone win coming at Sacramento.

San Antonio hit the Under in four of the final six road contests, while scoring no more than 116 points in any of those games.

The Grizzlies started the season at 2-6, but played .562 basketball the rest of the way to finish with a winning record.

The return of Jaren Jackson, Jr. from a knee injury sustained in the bubble last season is a big help for Memphis, as the former Michigan State standout is averaging 14.4 ppg in 11 games.

Memphis split 12 games against Southwest division opponents this season, which included one loss each at home to Houston, Dallas, San Antonio, and New Orleans.

These teams were involved in high-scoring games in all three matchups this season. It's clear that Memphis can score on San Antonio, but will the Spurs be able to keep up? This game should eclipse the Over just like the previous three contests did.