The Eastern Conference Play-In Tournament will resume on TNT this Thursday night with an elimination game between Indiana and Washington being the only matchup slated for the evening.

So, VI is getting you ready with a variety of betting resources to help handicap all the action.

Indiana enters Thursday’s contest as a three-point underdog against the home-standing Wizards – marking the third straight matchup between these teams that Washington has been favored in after Indiana was favored by seven points in the first meeting (WAS +7).

The over-under for this event currently sits at OU 238.5 – which actually sets a significantly lower bar than the previous two affairs between these teams, considering the totals set for those two matchups averaged out to roughly OU 248. 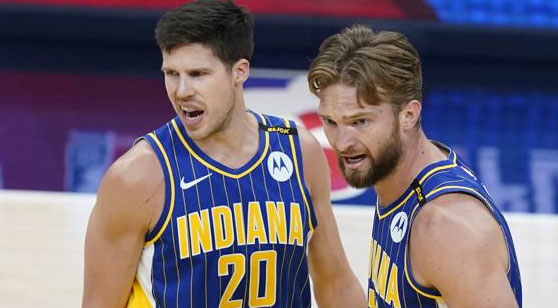 The Pacers shot lights out against the Hornets on Tuesday but are looking for their first win against Washington this season. (AP)

After entering last year’s playoffs as the fourth seed in the conference, the Pacers finished up their current season with a losing record (34-38) and earned the ninth seed this time around.

Indiana showed up to its play-in game looking like a completely rejuvenated squad though, as the Pacers stomped Charlotte on Tuesday by nearly 30 points in a game Indiana was favored by just two points in.

On the flip side, Washington wrapped up the regular season riding its most impressive stretch of performances this year – heading into the play-in round boasting wins in 15 of 20 games.

All five of the Wizards’ losses during that timeframe came in matchups against teams that are currently still alive in this year’s postseason.

Washington was exposed in its first postseason matchup against the Celtics on Tuesday night though – as the Wizards were muscled from start to finish during the 18-point loss, despite Boston playing short-handed without Jaylen Brown throughout these playoffs.

Washington posted a perfect 3-0 record against the Pacers during this year’s regular season – with all three of those contests easily going over the total set for Thursday’s tilt (OU 239), thanks to the whopping average of 272 points per game these teams posted across their trio of matchups.

The first matchup between these teams contained a relatively pedestrian level of scoring volume for a Wizards’ game – as Washington managed to pick up a 132-124 victory behind a monster triple-double effort from Russell Westbrook (36 points, 21 assists, 14 rebounds), despite Bradley Beal not seeing any floor-time during that contest.

Beal did participate in Washington’s most recent pair of track meets against the Pacers though – as the Wizards posted an average of 143.5 points per game on roughly 50% from the floor across their latest two victories over Indiana.

When fully healthy, Indiana possesses the talent to compete with some of the top teams in the Eastern Conference. The Pacers have been plagued by injuries for the entirety of their current campaign though – starting with T.J. Warren’s season-ending foot injury back in December.

It continued through the postseason with Myles Turner, Caris LeVert, and Jeremy Lamb already ruled out ahead of Thursday’s affair.

The depth in Indiana’s rotation was on full display Tuesday night though – as eight different Pacers’ players eclipsed double-digit scoring on the way to their blowout victory over Charlotte.

Betting the ‘over’ in Pacers’ games during the regular season played at the most profitable rate across the league in that department – with the total cashing at a 45-27-1 clip in matchups containing Indiana.

Indiana’s high-scoring trend appears to still be gaining momentum during this play-in tournament too – considering the total has gone over in four straight Pacers’ games, which includes their 144-117 victory this past Tuesday.

After being eliminated from the bubble before the start of last year’s playoffs with a lackluster record of 25-47, the Wizards went out and acquired Westbrook from the Rockets in exchange for John Wall and a pick this past offseason.

I think it’s safe to say Washington has emerged as the immediate victor in the trade by now though, considering Houston finished up the regular season with the worst record in the league at 17-55, while the Wizards have a handful of potentially winnable play-in games on tap.

Betting the total in Wizards’ games was a rollercoaster ride from start to finish during the regular season – with the total finishing up deadlocked 36-36 in matchups containing Washington.

That trend of sporadic scoring has continued down the homestretch and into the playoffs too – considering Washington wrapped up its regular season campaign by following up six straight ‘over’ results with four straight ‘under’ results, which includes this past Tuesday’s low-scoring affair in Boston (U 233.5).

Malcolm Brogdon is still listed on the Pacers’ injury report as questionable with the hamstring injury that held him out of Indiana’s last 10 regular-season games.

The UVA product looked pretty healthy during Indiana’s blowout win over the Hornets on Tuesday night though – considering Brogdon posted 16 points and eight assists across just 21 minutes of action in the victory.

Prior to the matchup, he picked up his hamstring injury, Brogdon was averaging 22.3 points per game across his last 10 outings – while falling short of the 20-point mark just three times during that timeframe.

I’ll back Brogdon to get back over the hump on the scoreboard here, as he’s set to square off with a Washington squad that gave up nearly 26 points per game to point guards during the regular season.

After wrapping up the regular season on a high note, Washington was exposed by Boston in the first round of the play-in tournament, as the Wizards put up just 100 points during their blowout loss to the Celtics on Tuesday night – who are playing without their All-Star guard, Jaylen Brown.

On the other hand, Indiana puttered its way to the finish line down the homestretch of the regular season due to various injury concerns – but appeared visibly healthier during their first playoff game, as the Pacers put up 144 points on 55% from the floor in their blowout victory over Charlotte on Tuesday night.

I’ll take the points with Indiana here, as I still believe the Pacers are the slightly better team in this matchup – even with their various lingering injury concerns.