It should be no surprise that the Brooklyn Nets own a 1-0 series lead over the Boston Celtics in their opening round best-of-seven series.

However, the shocking part is the Nets dug themselves a 12-point hole before rallying for the victory. 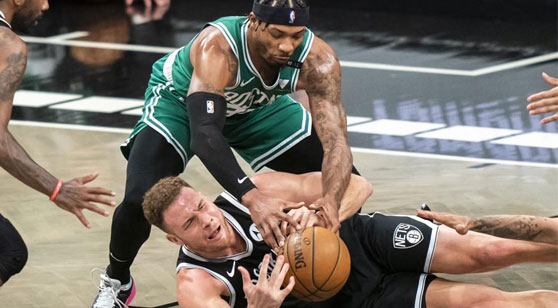 The Nets have taken all four meetings from the Celtics this season, including a Game 1 victory at home. (AP)

Boston figured it would be a tall task to knock off Brooklyn in the opening round of the playoffs as the Celtics lost to the Nets three times in the regular season.

Brooklyn didn't shoot the ball well from three-point range (8-of-34), but the Big Three of Kyrie Irving, Kevin Durant, and James Harden combined for 82 points in the win.

Boston needs a gargantuan effort from young star Jayson Tatum in basically every game to give the Celtics a shot. Tatum torched the Wizards for 50 points in the play-in tournament, but the former Duke standout was limited to 22 points on 6-of-20 shooting in Game 1.

The 'over' was never threatened as the closing total hit 232.5, but the two Atlantic Division squads didn't even hit the 200-point mark in the opener.

The Celtics are currently on a 5-0 run to the 'under' the last five games, while getting held below 99 points in four of their past five road contests.

Since the 2014-15 season, the Celtics are 0-5 in Game 2's of a playoff series after losing the opener. Boston covered only once in this stretch, which came as 11-point underdogs against Cleveland in the 2015 first round.

Brooklyn has covered the spread in each of its last eight home victories, including five straight wins at Barclays Center by double-digits.

Brooklyn has too much firepower for Boston and the Celtics had a great opportunity in Game 1 to steal the series advantage, but couldn't. The Nets should get off to a better start in Game 2 and roll past the Celtics for a 2-0 series edge.