Eastern Conference postseason action will resume on Saturday afternoon with the Bucks and Heat set to kick off the weekend festivities with Game 4 during the first event on TNT’s nationally televised slate.

So, VI is getting you ready with a variety of betting resources to help handicap all the top contests.

After blowing out Jimmy Butler and company in back-to-back matchups, Milwaukee heads into Game 4 as a five-point favorite over the Heat at American Airlines Arena – marking just the ninth home-matchup Miami has been listed as an underdog in this year.

The total for this event is currently stationed at OU 221.5, which is the lowest bar set for a Bucks’ game since squaring off against Charlotte back towards the beginning of April (O 219.5). 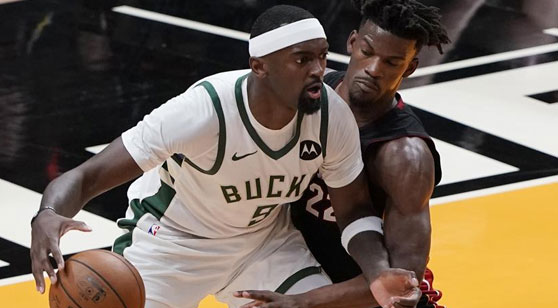 The Bucks seek the four-game sweep of the Heat on Saturday afternoon at American Airlines Arena. (AP)

After finishing with the best record in the Eastern Conference across consecutive regular seasons, the Bucks began their current campaign riding a bumpy stretch of results – with Milwaukee posting a record of 10-8 to start the year, which includes losses in matchups against the Pelicans, Hornets, and Knicks during that span.

On the other hand, after winning the East last year and punching a ticket to the NBA Finals, the Heat have played relatively pedestrian basketball to follow up their title run – earning the sixth seed with a record of 40-32 during the regular season, and a tough matchup out of the gate against Milwaukee to begin the playoffs.

“Pedestrian” would be a nice way to put how the Heat have played over the last few days though, considering the Bucks have smoked Miami by an average of 31.5 points across their latest two matchups – now giving Milwaukee a three-game advantage heading into Game 4 of this series.

Miami and Milwaukee split a high-scoring mini-series back in December of the regular season – with each of these teams claiming a double-digit victory over the other during a two-game weekend set that contained an average of 234 points per game in it (O 226.5, U 228).

The following meeting between these teams resulted in another double-digit win for the Heat though – as Miami managed to pull off an upset victory by holding the Bucks to just 108 points on 39% from the field, despite the absence of Butler in the contest (MIA +6.5).

The first three playoff matchups between these teams have looked completely different from the others though – as Khris Middleton hit a dagger in overtime to seal the Bucks’ 109-107 victory in the series opener, and Milwaukee ran the Heat out of the building by an average of 30+ points in the following two events.

It took Milwaukee a month or so to get the ball rolling under its new construction, but after finishing first in the East in back-to-back regular seasons and having very little playoff success to show for it, the Bucks acquired Jrue Holiday from New Orleans this past offseason.

That appears to finally be paying off in the opening round of the postseason, considering Milwaukee already has last year’s conference champs on the ropes 3-0 this time around.

Regarding the total though, betting the ‘over’ in Bucks’ games was one of the most consistently profitable wagers throughout this year’s regular-season – highlighted by the total going over in 57.8% of matchups containing Milwaukee, which ranked second in the conference in that department.

That pattern of ‘over’ results has fizzled out since mid-April though – considering the total has cashed at a 50% over-under split across Milwaukee’s latest 20-game window, which includes the two matchups that stayed on the low-scoring side of the bar in this series (U 224, U 227).

It seemed like most people gave the Heat a punchers’ chance against Milwaukee heading into this series.

Even after dropping a heartbreaker by two points in Game 1 and getting stomped by 34 in Game 2 – I still thought there was a slight chance American Airlines Arena could send a jolt through Miami’s lineup during a pair of home matchups and make this a competitive series again.

After getting blown out by 29 points at home in Game 3 though, I’m finally ready to wave the white flag on that final sliver of hope.

It appears Miami just doesn’t possess the offensive weaponry to keep up with the Bucks anymore, even with Bam Adebayo holding Giannis Antetokounmpo relatively in-check throughout the first three games of this series (45% FG, 24.6 PPG).

Despite ranking 25th in the league in scoring during the regular season (107.6), leaning towards the ‘over’ in Heat’ games was the more profitable direction to sway in this year – considering the total has gone over in roughly 53% of matchups containing Miami following last year’s title run.

That high-scoring trend has lost some traction since mid-May though, as the total has stayed below the number in four of the last six Heat’ games – which includes the two ‘under’ results posted in this series.

Even though the Bucks clobbered Miami by an average of 22 points per matchup to kick off this series, Antetokounmpo has posted rather underwhelming stat lines across Milwaukee’s first trio of playoff victories – averaging just 24.6 points on roughly 45% from the field since the conclusion of the regular season.

I’ll back Giannis to have another tough night in the scoring department here, as Adebayo’s elite defensive presence should continue to force the ball into the various hands of Milwaukee’s supporting cast – especially with Antetokounmpo getting added to the injury report due to some groin soreness on Friday afternoon.

After seeing the level of intensity the Heat battled with during their overtime loss in the series opener, I thought getting stomped by 34 in Game 2 was probably just a fluke that would ultimately set the stage for Miami to bounce back and make this a competitive series again after getting a pair of home-matchups under their belt.

Following another blowout victory for Milwaukee in Game 3 though, it seems like the fluke in this series might have actually been the matchup that Miami lost by a bucket in overtime.