The Atlanta Hawks have a chance to take a commanding 3-1 series lead over the New York Knicks on Sunday afternoon. The Hawks took care of business against the Knicks on Friday night, and another win in Game 4 will put this team on the precipice of the Eastern Conference semifinals.

It’s been five years since the Hawks made it to the conference semifinals, and they are hoping to do better after being unceremoniously swept by LeBron James and the Cleveland Cavaliers. However, it won’t be easy for this team to put away the Knicks. 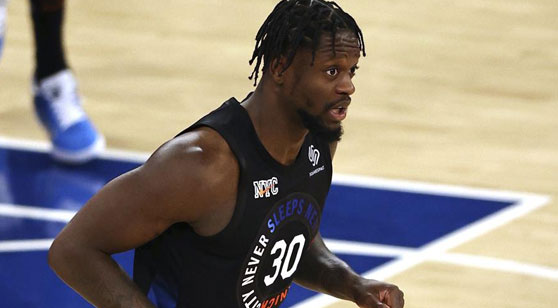 Julius Randle looks to improve his shooting from the floor as the Knicks battle the Hawks on Sunday. (AP)

Trae Young has been the best player on the court in all three games this series. He had 30 points in each of the first two games, but it was his passing that led to an Atlanta victory in Game 3. Young dished out 14 assists and broke down the Knicks’ defense with his vision.

The Hawks were red hot from beyond the arc on Friday night. Atlanta knocked down 16-of-27 threes (59.3%), torching the best perimeter defense in the league.

Danilo Gallinari came off the bench to sink all three of his looks, and Kevin Huerter and Bogdan Bogdanovic both went three for four from downtown.