Western Conference postseason action will resume on Monday night with Jazz-Grizzlies Game 4 set to wrap up TNT’s nationally televised double-header for the evening.

Despite Utah winning Games 2 and 3 by a double-digit margin, the Jazz head into Monday’s contest as a five-point favorite over Memphis at FedEx Forum – which is roughly the same spread posted for the third matchup of this series (UTA -5.5).

The total for this event is currently stationed at OU 225 – which is also very similar to the number posted ahead of the third postseason meeting between these teams (O 225.5). 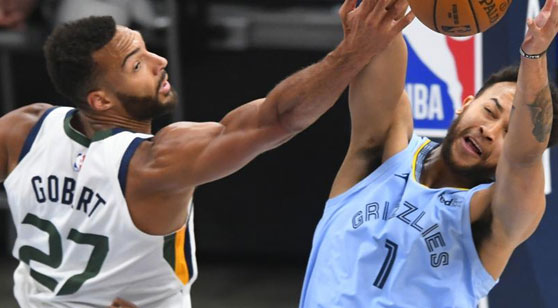 The Jazz seek a 3-1 series lead over the Grizzlies when the teams meet up on Monday at FedEx Forum. (AP)

The Jazz finished out the regular season with superstar Donovan Mitchell sidelined due to an ankle injury, which even held him out of Utah’s first-round playoff opener against Memphis – resulting in a three-point win for the Grizzlies in Salt Lake City.

Mitchell decided to battle through the discomfort in Games 2 and 3 though, which seems to have made a tremendous impact on the Jazz at both ends of the floor.

Utah picked up victories in the second two matchups by an average differential of 11 points, despite the two-time All-Star shooting 17-of-42 from the floor over the course of his first two postseason performances (40.4%).

The Jazz swept a three-game series against Memphis during the regular season – with all three of those victories cruising 'over' the total set for Monday’s tilt at an average of 228.7 points per game.

Utah’s original two wins were propelled by a pair of 35-point performances from Mitchell in a March back-to-back set – as Utah pulled off victories in a nail-biter and a blowout to kick off the season series against Memphis.

In the final regular-season meeting between these teams, the Jazz were forced to play without their superstar since Mitchell dealt with some ankle issues down the home stretch.

It didn’t seem to make a difference though, as the Grizzlies still failed to knock off Utah without its primary scoring threat – thanks to 20-point performances from Mike Conley, Jordan Clarkson,, and Bojan Bogdanovic.

Despite wrapping up the regular season with Mitchell on the sidelines due to an ankle sprain, the Jazz still battled down to the wire against Phoenix for the top seed in the conference.

Utah topped Phoenix by one game with a 5-2 run down the final stretch, which has forced Devin Booker and company into a brutal first-round matchup against the Lakers.

The Jazz leaned towards the low-scoring side of the spectrum during this year’s regular season – considering the total went 'under' at a 54% clip in matchups containing Utah, which ranked eighth across the league in that department.

The scoring volume in this first-round series has started to bend back towards the north-side of the spectrum though – considering the total has gone 'over' in all three matchups so far.

The Grizzlies had their sights set on the eighth seed in the conference down the homestretch of the regular season – finishing up with wins in five of their last six games, which almost allowed Memphis to swoop in and steal Golden State’s first-round play-in opportunity against the Lakers.

Instead, Memphis needed a pair of wins over the Warriors and Spurs to secure the final spot in the Western Conference playoff bracket and ended up pulling it off behind two spectacular defensive efforts – as the Grizzlies held their opponents to an average of 97.5 points per game across two play-in tournament victories.

Betting the total in Grizzlies’ games was a rollercoaster ride from start to finish during the regular season – with the total finishing up deadlocked 37-37 in matchups containing Memphis.

There has been some newfound consistency in scoring volume during this Grizzlies-Jazz first-round series though – highlighted by the total going 'over' in all three matchups.

After averaging roughly 19 points per game over the course of the season, Ja Morant has really cranked up the intensity at the offensive end during Memphis’ first-round series against the Jazz – currently averaging over 33 points per game on 51% from the floor across the 21-year-old’s first three career-playoff outings.

I’ll back Morant to keep it going here, as I expect Memphis to keep leaning on the young superstar an extensive amount throughout this highly unfavorable first-round matchup.

After dropping the series opener at home during the absence of their superstar, the Jazz returned for Games 2 and 3 of this first-round matchup with Mitchell back in the lineup and immediately returned to dominance – claiming double-digit victories in both of the following affairs.

I’ll back the Jazz to cover here, as Utah appears to be the much better team in this matchup with Mitchell on the floor.