So, VI is getting you ready with a variety of betting resources to help handicap all the evening’s top matchups.

After dropping Game 5 in the Staples Center this past Wednesday, the Clippers travel to Dallas for Game 6 as a 2.5-point favorite over the homestanding Mavericks – despite Luka Doncic and company hosting Friday’s elimination matchup while holding a one-game lead over Los Angeles.

The total for Friday’s event has crawled down to OU 216.5 – after Games 4 and 5 in this series both easily stayed 'under' the number due to the pair of events containing a lowly average of 196 points scored across them. 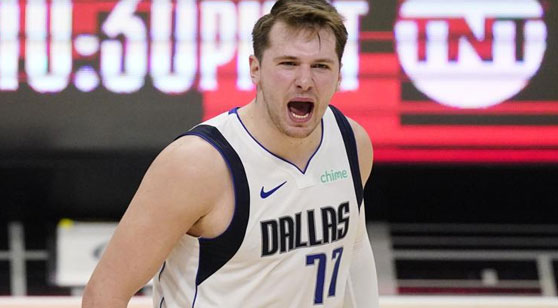 Luka Doncic and the Mavericks look to close out the Clippers at home tonight in Game 6. (AP)

Five games are in the books between Dallas and Los Angeles in this first-round matchup – and still, neither team has managed to win a game at home in this series.

The Clippers claimed the fourth seed in the conference by posting a record of 47-25 during the regular season, which comfortably topped Mavs’ in the standings by five games – earning Kawhi Leonard and company homecourt advantage in this first-round matchup against Dallas.

L.A.’s advantage was quickly stolen away from them to open the series though, as Dallas mounted back-to-back victories by an average of eight points at the Staples Center across Games 1 and 2 – leaving the Clippers with the opportunity for just two more home games before the conclusion first round.

The Mavericks’ commanding two-game lead quickly vanished during their trip back to Dallas though, as Los Angeles evened up the series with two straight victories at the American Airlines Center – regaining homecourt advantage with three games left to play.

Most recently these teams squared off in Los Angeles for a pivotal sixth matchup on Wednesday night and the home team prevailed again, as the Mavs’ picked up a five-point win behind another monster 40-point performance from Doncic – officially pushing the Clippers to the brink of elimination in this series.

Dallas won two of three regular-season matchups against the Clippers before the start of this year’s playoffs – with all three of those affairs comfortably staying 'under' the total set for Friday’s event (216.5), which can be attributed to the losers in those contests averaging just 87 points per game in them.

The Mavericks have dominated during their wins over Los Angeles this year – claiming a pair of regular-season victories by an average of 33.5 points, and recently beating them by an average of seven points across Games 1, 2, and 5 in this series.

Similarly, the Clippers’ lone regular-season victory over Dallas also came by a double-digit margin – but it seems like L.A. just happened to catch Luka on an off-night in that matchup, as the Mavericks’ primary scorer tallied just 25 points on 23 shot attempts during the 10-point loss.

Clearly, times are very different now – but these teams squared off during the opening round of last year’s playoffs back in the NBA bubble, which resulted in a six-game series win for the Clippers.

After getting knocked off by Denver in the second round of last year’s postseason, I expected the Clippers to get the ball rolling on offense much faster than they did in this first-round matchup – stumbling out of the gate with two straight losses to open their current series against Dallas.

On a higher note though, Los Angeles is 2-0 away from the Staples Center since the conclusion of the regular season – with the Clippers’ only two wins in this series coming at AAC in Dallas, which is where Friday’s matchup will take place.

Los Angeles has leaned towards the low-scoring side of the spectrum over its most recent stretch though – highlighted by the total staying 'under' in 15 of the Clippers’ latest 20 matchups, which includes the three 'under' results in this series.

Dallas landed itself in prime position after claiming a pair of victories in Games 1 and 2 of this first-round matchup – considering the Mavericks traveled back to Dallas with potentially three home games left to play in the series while needing only two more wins to advance.

After Game 3 though, the Mavericks seemed to hit a worrisome bump in the road when Doncic told the press he was experiencing neck pain that extended through his left arm following the loss – which also appeared to significantly bother him during his wretched performance in Game 4 (19 points, 37.5% FG).

Luka heroically battled through the pain in Game 5 though – as the superstar propelled his team to a narrow victory by exploding for 42 points on 17-of-37 from the field during the event, while also contributing 14 assists and eight rebounds to the cause.

For those still pondering Doncic’s health heading into the final two games of this series – I would say he’s feeling “healthy-enough,” considering in Game 5 he efficiently accounted for over 80% of the Mavs’ offensive production with his 42 points and 14 assists.

After averaging 33 points per game at a 63% clip across his first four postseason outings, Leonard didn’t provide his team with much offensive support in Game 5 this past Wednesday – tallying just 20 points on 37% from the field during L.A.’s pivotal loss at the Staples Center.

I’ll bet on Kawhi to bounce back here though, as Dallas still appears unable to defend the two-time Finals’ MVP – he just happened to miss his fair share of open shots last game.

After evening up this first-round series with consecutive road wins, the Clippers nearly came back and pulled off a third straight victory in Game 5 this past Wednesday – as L.A. ended up falling to the Mavs’ by just five points in the event, despite Leonard’s dismal shooting performance (20 points, 7-19 FG).

I’ll back L.A. to take care of business and force a Game 7 here – as I think both Clippers’ superstars will show up in big ways for their team this time around.