Atlanta turned heads in Game 1 by shooting lights out in the first half at Philadelphia while holding off the top-seeded 76ers to grab a 1-0 series lead.

The 76ers look to even things up on Tuesday night at home and avoid a 2-0 series deficit before heading to Atlanta on Friday night. 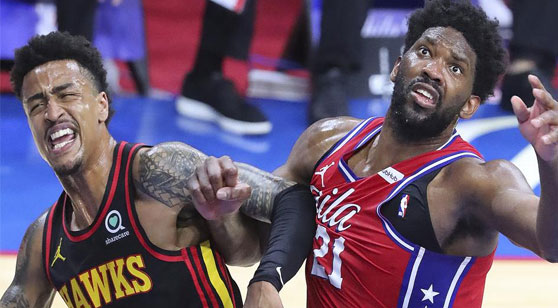 The Hawks captured the series opener with the 76ers as the two squads play Game 2 on Tuesday night. (AP)

Atlanta showed that finishing off New York in five games of the first round was no fluke after the Hawks jumped on the 76ers in Game 1 of the second round.

The Hawks scored 42 first quarter points on Sunday and led the 76ers by 20 points at halftime before holding on for a 128-124 victory.

There was uncertainty regarding 76ers' All-Star center Joel Embiid and if he would play after missing Game 5 of the first round with a knee injury.

Embiid suited up and didn't miss a beat by leading Philadelphia with 39 points, but the 76ers missed 11 free throws and 19 three-point attempts, while Ben Simmons misfired on seven of 10 tries from the foul line.

Atlanta is riding a 7-1 ATS run the last eight games, while owning a 6-3 ATS mark in the past nine road contests overall.