Following a rough start shooting from the floor, the top-seeded Jazz bounced back to knock off the Clippers in Game 1 of the Western Conference semifinals, 112-109.

Utah has an opportunity to grab a 2-0 series lead heading back to Staples Center this weekend with a win on Thursday night. 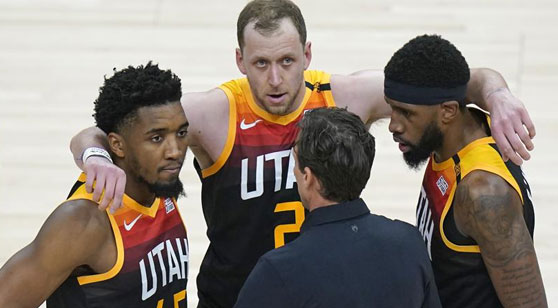 The Jazz seek a 2-0 series lead over the Clippers as the teams hook up on Thursday in Salt Lake City. (AP)

Los Angeles lost its first playoff game away from Staples Center after posting a 3-0 road mark in the first round series victory against Dallas.

Utah pushed as three-point favorites in the 112-109 triumph, while the game barely stayed 'under' the total of 221.5, in spite of the 63-point fourth quarter between the teams.

Donovan Mitchell overcame a poor shooting start to torch the Clippers for 45 points on 16-of-30 shooting from the floor, including hitting six three-pointers.

Utah feasted on Memphis from long distance in the first round, but the Jazz shot 17-of-50 from three-point range in Game 1, while beginning the game 5-of-28 from the floor.

The Clippers were led by Kawhi Leonard's 23 points, while Paul George struggled from the floor by shooting 4-of-17, but finished with 20 points and 10 rebounds.

Utah took a 112-104 advantage with 1:19 remaining in regulation, but L.A. scored the final five points from Leonard and George to grab the push, marking the first non-cover for the Jazz since the Game 1 loss to Memphis in the first round.

Since starting the postseason with a 2-1 mark to the 'over,' the Clippers have hit the 'under' in four of the past five games, including in both contests with totals of 220 or higher.

In the last two postseasons, the Clippers have dropped three consecutive Game 2's, as the margin of defeats were 13, 9, and 6 points.

The 109 points allowed by the Jazz in Game 1 were the fewest given up so far in their six playoff contests, while Utah owns a 6-1-1 ATS mark the last eight games overall.

The Jazz found a way to rally back in Game 1 without the services of veteran guard Mike Conley, whose status is up in the air for Game 2 with a lingering hamstring injury.

Utah can't get off to a worse start than it did in the series opener, but still managed to grab the victory. The Jazz should shoot the ball better in Game 2 and pick up the home win for a 2-0 series lead heading west.