The one series that looked like a mismatch out of the four conference semifinal matchups has actually been competitive.

After Atlanta held off Philadelphia in Game 1, the 76ers bounced back in Game 2 at home to even up the series at 1-1 with things heading to the Peach State. 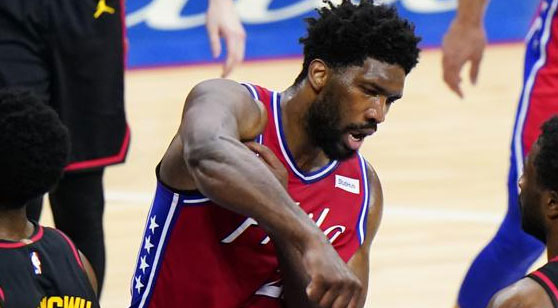 Joel Embiid and the 76ers head to Atlanta tied at 1-1 with an important Game 3 on Friday night. (AP)

Atlanta turned its season around when Nate McMillan was named interim head coach on March 1. The Hawks owned a 14-20 at the time, but Atlanta finished 27-11 in the final 38 games after McMillan took over to capture the Southeast division title.

Following a 4-1 first round series triumph over the Knicks, the Hawks were in for a major test in the second round against the top-seeded 76ers.

Atlanta passed the first test of this series by scoring 74 first half points in a 128-124 victory at Wells Fargo Center as 4.5-point underdogs.

However, the Sixers jumped out to a 33-20 lead after one quarter in Game 2 before the Hawks cut the halftime deficit to 57-55.

Joel Embiid torched Atlanta for 40 points on 13-of-25 shooting from the floor, while Tobias Harris put up 22 points in the win for Philadelphia.

Trey Young struggled from the field by shooting 6-of-16, while hitting only 1-of-7 three-point attempts, but the Hawks' star guard scored 22 points and dished out 11 assists in the defeat.

The 76ers have covered consecutive games only once in the playoffs (Games 2 and 3 against Washington), while going 5-2 to the 'over' in seven postseason contests.

Only twice this season has Philadelphia been a road favorite of two or fewer points. The 76ers won each of those contests, but pushed as a one-point favorite in an overtime victory at New York in late March, while knocking off Toronto as 2.5-point chalk in late February, 109-102.

Since late February, Atlanta has won and covered in five of seven opportunities in the home underdog role, including victories against Phoenix, Milwaukee, and Denver.

Atlanta has shown that it can hang with Philadelphia and the Hawks have been the best home team in the NBA over the last few months.

Returning to State Farm Arena with confidence after picking up a split in Philadelphia should boost the Hawks to a Game 3 victory over the 76ers.