Eastern Conference postseason action will resume on Sunday afternoon with the Nets and Bucks set to square off for a pivotal Game 4 in Milwaukee at three o’clock Eastern time on ABC.

After sneaking away with a crucial one-possession victory at home in Game 3, Milwaukee heads into Sunday’s matchup as a 1.5-point underdog against the visiting Nets – marking the first time the home team has been a ‘dog this series.

The total for Sunday’s event has fallen to OU 228.5, which is the first time the total has been set below 230 in this second-round series – thanks to the first three events containing a lowly average of 201 points scored across them. 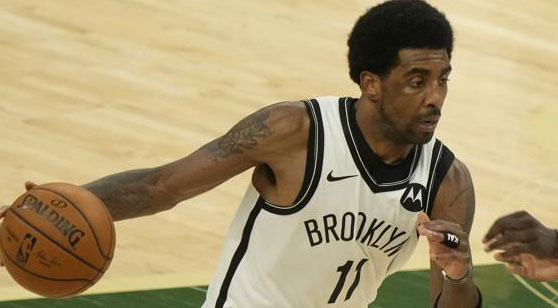 Kyrie Irving and the Nets look to bounce back from a Game 3 loss on Sunday at Milwaukee. (AP)

The Nets endured a revolving door of injury concerns throughout the year, which resulted in Brooklyn’s “Big Three” playing just four games together before the conclusion of the regular season and only five of eight playoff games so far.

That lack of chemistry didn’t seem to matter during their gentleman’s sweep of Boston in the first round though, considering the Nets racked up a lofty total of 124 points per game across those five contests – which can mainly be attributed to superstars James Harden, Kevin Durant, and Kyrie Irving knocking down 45% of their 104 long-range attempts in the short series victory.

Despite Harden exiting in the opening minutes of Game 1, Saturday’s second-round series opener still resulted in an eight-point win for the Nets – as Irving and Durant seemed to effortlessly fill the superstar’s scoring void in the event by knocking down half of Brooklyn’s field goals at a 45% mark. (23-51 FGA).

Giannis Antetokounmpo played phenomenal for Milwaukee in the loss, as the two-time MVP racked up 34 points on 67% from the floor during the series-opener.

His supporting cast didn’t provide much ‘support’ throughout the event though, as Middleton and Jrue Holiday combined for just 30 points on 13-of-42 from the field in the contest – practically negating Antetokounmpo’s magnificent outing.

Game 2 was like Groundhog’s Day for Milwaukee’s superstar, as again Giannis received very little help from his supporting cast during the Bucks’ second loss of the series – highlighted by Middleton and Holiday combining for just 30 points on 13-of-30 from the floor during the blowout.

Milwaukee never really stood a chance in Game 2 though – considering the Nets set a franchise-record for made three-pointers in a playoff game in the blowout victory (21) and did it at an extremely efficient clip (50%).

The Bucks weren’t any better at the offensive end back home in the third matchup, as Milwaukee scored just 86 points on 38% from the floor and 6-of-31 from beyond the arc during the virtual must-win event – highlighted by another dismal shooting performance from Jrue (9 points, 4-14 FGA).

The Deer had a one-two punch when they needed it most in the contest though, as Middleton and Antetokounmpo knocked down 26 of the Bucks’ 34 successful field goals at a 47% clip on the way to a three-point victory at Fiserv Forum in Game 3.

The Nets, on the other hand, shot poorly throughout the whole third event, as Brooklyn scored a season-low 83 points on 36% from the field and 25% from long-range in the loss – with Durant getting the horrendous offensive outing started by shooting 2-of-10 in the first half, and the trio of Irving, Bruce Brown, and Joe Harris keeping the struggles alive by shooting a combined 6-of-24 in the second half.

The following set of matchups took place without Harden towards the beginning of May though and resulted in a pair of home wins for Milwaukee – as the Bucks escaped with two victories by an average of 4.5 points behind back-to-back monster performances from Antetokounmpo (42.5 PPG, 48% FG).

Before the start of the postseason, there appeared to be very little separation among the top contenders vying to take home this year’s title – with Brooklyn coming in as a moderate favorite at +250 odds, but still a considerable amount of love getting dished out to long shot contenders such as the Clippers (+600), Sixers (+750), and Bucks (+950).

After blowing out Milwaukee by an average of 23 points in Games 1 and 2 though, the Nets (+110) emerged as the undisputed favorite to take home this year’s title in the waking days of the second-round – considering the Clippers (+1600) had already fallen into an 0-2 hole against Utah, and Vegas still wasn’t taking the Sixers (+1000) seriously at the given time.

Brooklyn (+150) is still the clear-cut favorite after losing Game 3 and is still listed at far too hefty of a price tag to consider at this point and time – but books seem to already somewhat be preparing for a rainy day for the Nets on Sunday, considering Philadelphia (+750) and Milwaukee’s (+950) title-odds have returned to unappealing marks they sat before the postseason began.

Milwaukee managed to clean things up at both ends of the floor after the All-Star Break, as the Bucks ended up closing the regular season with wins in eight of their final 10 contests – comfortably claiming the third seed in the East with a record of 46-26.

None of that matters if Giannis can’t get any help from his supporting cast in the postseason though.

Milwaukee didn’t really need exceptional performances from its “Big 3” against the Heat, as the Bucks bullied Miami by at least 15 points in three-of-four matchups during their first-round sweep.

Now they are up against a once-in-a-generation offensive powerhouse though, Milwaukee needs a lot more than just a combined 35 points per game on 38% from Middleton and Holiday to pull off the upset in this series – which is what the duo has averaged against Brooklyn so far.

Middleton led the Bucks in scoring during their thrilling Game 3 victory on Thursday night – and I think Milwaukee is going to need a few more gutsy performances like that from its supporting cast to come back and knock off the heavily favored Nets in this matchup.

After scoring 34 points on 16-of-24 from the floor during Milwaukee’s series-opening loss, Antetokounmpo appeared to give up the steering wheel at the offensive end in Games 2 and 3 against the Nets – considering the two-time MVP has averaged just 26 points on 23 shot attempts across the Bucks’ latest two outings.

That can mainly be attributed to Middleton ramping up his offensive production to 26 points per game while attempting an average of 23 field goal in those affairs.

I’ll back Giannis to have a big night at home in Game 4 though, as I don’t think he will get quite as much help from Middleton down the stretch of this series – which should result in Milwaukee heavily leaning on its primary superstar for a hefty amount of scoring.

After setting a postseason franchise-record by knocking down 21 three-pointers at a 50% clip during their blowout victory in Game 2, the Nets scored just 83 points behind 8-of-32 from long-range on the way to their one-possession loss on the road in Game 3.

I’ll take lay the points with Brooklyn in Game 4 though, as I would be pleasantly surprised if this series ends up getting extended past five games – but I won’t be betting on it.