Western Conference postseason action will resume on Sunday night with the Suns and Nuggets set to square off for Game 4 in the Mile High City at eight o’clock Eastern time on TNT.

The total for Sunday’s event opened at OU 222, which is the lowest bar set for a matchup in this second-round series – thanks to Games 2 and 3 both staying under at an average of 219.5 points per contest. 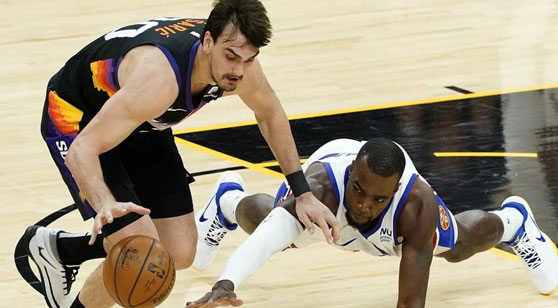 The Suns have dominated the Nuggets through three games as Phoenix seeks the sweep on Sunday night. (AP)

After assertively handling business against the defending champs in six games to kick off the postseason, it took the Suns a little while to get back into the swing of things in their second-round series opener against Denver – as Phoenix entered the second half of Game 1 narrowly trailing the Nuggets.

The combination of Phoenix’s stifling defense and explosive offense enabled the Suns to easily run away with the victory after the break though – highlighted by Chris Paul and Devin Booker combining for 20 points on nine-of-nine from the field in the fourth quarter.

The Suns carried that unstoppable momentum through their wire-to-wire victory in Game 2 as well – as Phoenix continued its rampage by putting up 123 points behind another spectacular long-range performance in the blowout (48% 3PA), while also managing to hold Denver under 100 points for just the eighth time all season in a 123-98 win.

Despite getting blasted on the road in Games 1 and 2, Vegas gave a slight nod to the Nuggets back in the Mile High City ahead of the third matchup between these teams – as Denver went into Game 3 as a two-point favorite over the visiting Suns.

Game 3 was more of the same though, as Phoenix’s starting backcourt outscored Denver’s 55-11 in the pivotal third contest of this series – leading to the Suns building a double-digit first-quarter lead and never trailing on the way to their 14-point victory.

Denver claimed wins in two of three matchups against Phoenix during the regular season – with the Suns picking up a narrow three-point victory in the first meeting, and the Nuggets escaping with a pair of overtime victories in the following two.

Anything that happens during the regular season should be taken with a grain of salt, but Booker didn’t participate in the final overtime matchup between these teams and Jamal Murray did – which doesn’t bode well for Denver, considering the opposing superstars’ roles have been reversed for this series.

The Suns were probably the most doubted second-seed to open the postseason in recent memory – and I also, am guilty of picking L.A. over Phoenix in the first round, but that was before Anthony Davis re-injured himself and left hobbled LeBron James on an island against what has gradually turned into a very dangerous basketball team.

That being said, the Suns have quickly proven that they are a legitimate threat to take home this year’s NBA title – especially if they can make quick work out of Denver in this second-round series and get the veterans on the squad some much-needed recovery time.

It will be interesting to see how the Nuggets respond after getting throttled by an average of 18.5 points in the first three matchups of this series – but I won’t be shocked if we just get another non-competitive basketball game and Phoenix cracks out the brooms at Ball Arena here.

The Nuggets’ chances of reaching the NBA Finals appeared to be chalked after the season-ending injury to last year's playoff hero Murray back in April.

Things weren’t looking too hot for them after their first-round postseason opener either, as Denver got pummeled by Portland at home in Game 1 – leaving Nikola Jokic and company utterly disrespected as a four-point underdog in three of five matchups to close out the series.

This year’s MVP left bettors scratching their heads one last time after the first-round though, as the Nuggets only lost one more game on the way to toppling Damian Lillard and the red-hot Blazers in a six-game set.

It looks like the Joker’s luck has finally run out in the second round against the Suns though, as Jokic and company have appeared completely over overwhelmed by Phoenix in the first three games of this series – but Denver is still honorably dealing the damage that it can against a fearsome stronghold in the West.

After scoring 34 points or more in five of six matchups in the first round against Portland, Jokic has been relatively quiet to start the second – averaging just 26 points on 23 shot attempts across his team’s disheartening trio of double-digit playoff losses to Phoenix.

I’ll back the Joker to have a big night here though – as the Nuggets will probably end up getting eliminated in Game 4 this Sunday, but I fully expect the league’s MVP to go down swinging on his home floor if they do.

After getting spanked by 14 points or more in the first three matchups of this series, Denver heads into Game 4 as a three-point underdog against the visiting Suns.

If you think there’s a chance Jokic and the gang muster up some magic at home in Game 4 here, then my best advice is to just stay away – but I don’t really see that happening here.

I’ll lay the points with Phoenix in Game 4 – as the Suns, in my opinion, have already proven that they are the far better team in this matchup, regardless of where the event takes place.