The 1-0 series deficit for the top-seeded 76ers seems like a long time ago as Philadelphia has rebounded with consecutive wins over Atlanta to take a 2-1 edge.

The 76ers remain in Atlanta for Monday's Game 4 after cruising past the Hawks on Friday night as Philadelphia is two wins away from the Eastern Conference Finals. 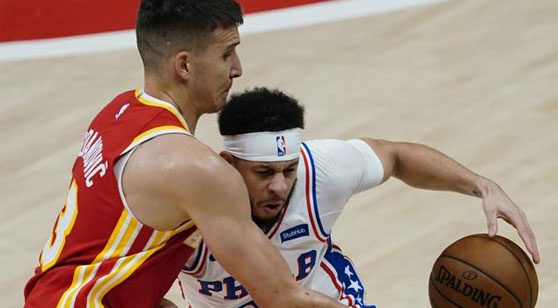 The 76ers seek a commanding 3-1 series lead over the Hawks when the teams meet on Monday night in Atlanta. (AP)

Atlanta shot 51% from the floor and hit 20 three-pointers in the 128-124 series opening shocker over Philadelphia at Wells Fargo Center.

The Hawks haven't been as fortunate in the last two games by shooting 46% from the field in a 118-102 setback in Game 2, while seeing their 13-game home winning streak go up in flames in Game 3.

Joel Embiid led the charge for Philadelphia once again by scoring 27 points, while Tobias Harris scored 22 points and Ben Simmons had a series-high 18 points in the win.

Atlanta struggled from long distance by hitting only 6-of-23 attempts from three-point range, as Trey Young put up 28 points in the loss.

The 76ers moved to 6-2 to the 'over' in the playoffs, while topping the 118-point mark in all six victories. Even in the two losses, Philadelphia has scored 114 and 124 points, as the Sixers are averaging the most points in the NBA in the playoffs (123.6 ppg).

Philadelphia is 5-1 ATS in its six playoff victories, as the lone ATS loss in a win came back in Game 1 of the first round against Washington in a 125-118 triumph as eight-point favorites.

The Hawks fell to 11-3 ATS in their last 14 home contests after the Game 3 loss, as Atlanta's past six home losses have come by double-digits.

In the last five matchups with Philadelphia, the Hawks have lost four times with the margin of defeats coming by 44, 22, 16, and 16 points.

It's hard to ignore the fact that Philadelphia has dominated Atlanta in the two wins in this series and the 76ers are a notch above this feisty Hawks' team. Even with Danny Green sidelined, Embiid can't be stopped and Philadelphia will prove to be too much for Atlanta once again.