After blowing second-half leads of 15 points or more in consecutive losses, Philadelphia travels back to the Peach State for Game 6 as a three-point favorite over the Hawks at State Farm Arena – which is roughly the same line set for the previous two meetings between these teams in Atlanta. 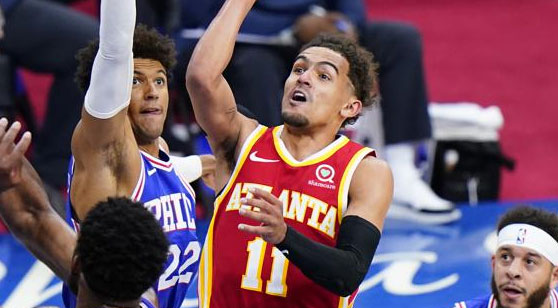 Trae Young and the Hawks look to finish off the 76ers with a Game 6 victory at home on Friday night. (AP)

Only to have that lead slowly shrunken down to four points before the conclusion of the event, as Philadelphia’s suffocating second-half defense nearly paved the way for Joel Embiid and company to pull off a stunning comeback in the opener – outscoring the Hawks 70-54 in the final two stanzas of the narrow loss mainly thanks to Young and Bogdanovic shooting just 2-of-13 from downtown during those periods.

The next few altercations looked a lot like the end of the first one, as the Sixers rumbled to a pair of decisive 16-point victories while asserting a convincing series-advantage in Games 2 and 3 – and appeared to have Atlanta on the ropes again in Game 4 by building a commanding 18-point lead in the second quarter.

Philadelphia completely fell apart on offense down the stretch of the fourth matchup though, as Embiid contributed just four points on 0-of-12 shooting during the Sixers’ disastrous 38-point performance in the second half – deadlocking this series at two games apiece heading into Game 5.

The Sixers appeared to have everything under control for most of Game 5 too, as Philadelphia went into the fourth quarter at home boasting an 18-point lead over Atlanta – propelled by Embiid’s 31 points on 11-of-13 shooting across the opening three stanzas.

Yet again though, Atlanta absolutely obliterated Philadelphia in the fourth quarter – as the Hawks exploded for 40 points on 73% from the floor across the final 12 minutes of Game 5, compared to the Sixers’ lowly 19 points on 29% from the floor during that timeframe (0-4 3PA).

Atlanta’s lone win over the Sixers came during Philadelphia’s mid-January COVID-19 crisis, as Ben Simmons, Tobias Harris, Seth Curry, Shake Milton, and Matisse Thybulle were all forced to sit out for health and safety reasons – resulting in an 18-point victory for the Hawks.

The Sixers were healthy for their back-to-back set against Atlanta towards the end of April though, and things played out much differently – as Philadelphia throttled the Hawks by an average of 33 points in a pair of home victories to close out the month.

After blowing a 26-point lead at home in Game 5, Philadelphia is now staring down the barrel of posting the most perplexing postseason loss in recent memory, considering the Sixers clobbered Atlanta in Games 2 and 3 of this series – and dominated for at least a half of all three losses (+51).

Despite still needing two straight wins to advance, Philadelphia (+140) heads into Game 6 listed as a slight underdog in this series – which personally, I don’t see much value in betting at this point.

For those who still like Philadelphia, my advice is to bet the games independently at alternate spreads – for example, Sixers -5.5 (+125) or Sixers -9.5 (+210) depending on how risky you are feeling.

Aside from the first half of Game 1 and the second half of Game 5 (ATL +45), the Sixers have completely dominated throughout their second-round matchup against Atlanta – smoking the Hawks by 67 points across the other 144 minutes of action in this series.

I’m not exactly bursting with confidence about the Sixers’ chances to win this series.

That being said, I still believe the Sixers are far more talented than Atlanta – and if they are going to come back and eliminate the Hawks here, I expect Philadelphia to do it by posting a pair of authoritative victories in Games 6 and 7.

The Hawks played the following three matchups with a chip on their shoulder though, as Atlanta stomped the Knicks by an average of 14 points the rest of the way – which included a dominant series-ending victory at MSG in Game 5 (103-89).

The Hawks were lights out to kick off their series-opener against Philadelphia – outscoring the Sixers, 74-54 in the first half, which enabled Atlanta to narrowly cling onto a four-point win in Game 1 despite getting smoked by 16 in the final two periods.

The latest affair between these teams, on the other hand, was extremely reminiscent of Game 1 – except played out backwards, as Atlanta trailed Philadelphia by 25 points late in Game 5 before cranking up the heat and escaping with a stunning road victory.

After racking up 31 points on 85% shooting in the first three-quarters of Game 5, Embiid considerably cooled off down the homestretch of the Sixers’ gut-wrenching loss in Philadelphia this past Wednesday – scoring just six points on 1-of-5 from the floor in the final stanza, while also contributing a pair of missed free throws in the closing moments to seal the Hawks’ stunning come-from-behind victory.

I’ll back the Process to have a crazy night on the brink of elimination here, as I have to imagine he will return to Atlanta with a point to prove in Game 6 – especially after blowing a massive lead at home in Game 5.

After blowing leads of 15 points or more in back-to-back losses, Philadelphia heads to Atlanta for Game 6 as a three-point favorite over the Hawks at State Farm Arena.

I’ll lay the points with Philadelphia here, as I still believe Doc Rivers has the far more talented squad in this matchup – they just need to minimize their mental mistakes down the homestretch of this series.