The Western Conference Finals will kick off this Sunday afternoon with the Suns and Clippers set to square off in The Valley for Game 1 at 3:30 Eastern time on ABC.

After cracking out the brooms on Denver at Ball Arena to conclude the second-round, Phoenix returns to The Valley for Game 1 of this series as a five-point favorite over the visiting Clippers – marking the third straight game L.A. has been listed as a ‘dog in following Kawhi Leonard’s latest knee injury.

The total for Sunday’s contest is currently stationed at OU 221.5 – which is a higher number set than all six of the Suns’ playoff matchups against the defending champs (OU 210.5), and lower than all four set against Denver (OU 223). 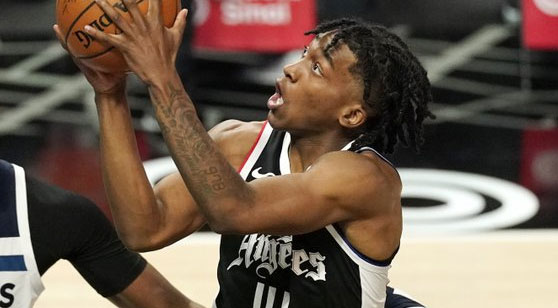 Clippers' forward Terance Mann is coming off a career-game in the Game 6 series clinching victory over the Jazz. (AP)

After admirably opening the postseason by knocking off the defending champs in six games, Phoenix carried an insurmountable amount of momentum into its second-round matchup against Denver – throttling the Nuggets by an average of 15.5 points per victory across the four-game sweep.

The Clippers, on the other hand, will be opening their second straight series on just one day’s rest, as L.A. needed all seven games in the first round to come from behind and drag down the Mavericks – and took a taxing six games to knock off the top-seeded Jazz in the second.

Ironically, L.A.’s two regular-season victories over Phoenix were all about Paul George, as the six-time All-Pro racked up an average of 36 points per game on 63% shooting in those events – compared to Kawhi’s average of 21 points on 34% across them.

Leonard didn’t participate in the latest matchup between these teams though, and the Suns finally managed to swing things back in their direction – as Phoenix beat the Clippers by eight at home behind a 49-point team-up effort from Devin Booker and Chris Paul to close these teams’ regular-season set.

The Clippers, on the other hand, have ridden quite the rollercoaster in order to reach this year’s Western Conference Finals, with its most recent plummet taking place due to the worrisome knee injury Leonard suffered in Game 5 against the Jazz – landing Ty Lue’s team as a fairly hefty underdog to advance from this series (+180).

Personally, I felt the Clippers-Jazz second-round series was practically “over” following Kawhi’s injury – and apparently, it was but for a very different reason than I anticipated.

Besides Kawhi, the Clippers were asleep on offense for most of their first-round matchup against Dallas – as the Claw averaged 32 points on 61% from the field across the seven contests in that series, while the rest of L.A.’s starters contributed just 60 points per game at a 44% clip during them.

Playoff P. finally woke up when his team needed him most though, as George averaged 32.5 points on 48% from the floor during L.A.’s closing pair of victories over the top-seeded Jazz.

Despite losing just two playoff games on their way to the Western Conference Finals, Brooklyn (+220) still entered Game 7 against Milwaukee slightly favored over Phoenix (+250) to take home this year’s NBA title – even with Saturday’s do-or-die matchup at the Barclays Center getting offered as a pick ‘em at most shops.

At full-strength, Brooklyn is far more dynamic and explosive than Phoenix on offense – but under these teams’ current circumstances, I’m not so sure.

Harden looks banged up and Kyrie’s postseason status is still somewhat vague – and until one of them evidently returns to full-strength, my vote gets cast to Phoenix as the favorite to win this year’s title.

Even with how resilient the Bucks have been at home in their second-round matchup against Brooklyn, I’m still not buying into Milwaukee yet – and I believe that series requiring all seven games is more of a tribute to Brooklyn’s brutal injury struggles, as opposed to Milwaukee playing solid basketball at home.

After averaging 15 points on just 20 minutes of action across the Clippers’ first four contests in the second round, Reggie Jackson saw over 35 minutes in both matchups following Kawhi’s demoralizing knee injury – leading to the veteran posting an average of 24.5 points on 15.5 shot attempts across L.A.’s final two victories over the Jazz.

I’ll back Jackson to carry that same momentum into this series against Phoenix – as he should continue to see a similar workload while Leonard remains on the sidelines.

Despite posting a pair of impressive victories with Leonard on the sidelines to put away Utah, I still feel the Clippers are sitting ducks against Phoenix ahead of this next series – especially if Kawhi isn’t there to bail them out of trouble amidst P.G.’s frequent cold spells.

I’ll lay the points with Phoenix here, as I will be genuinely surprised if this series ends up being competitive – unless the Claw makes a speedy, triumphant recovery.