The Western Conference Finals will resume on Tuesday night with the Clippers and Suns set to square off for Game 2 in The Valley at nine o’clock Eastern time on ESPN.

After narrowly escaping with a victory in Sunday’s series opener, Phoenix heads into Game 2 as a six-point favorite over the visiting Clippers – which is a one-and-a-half-point climb up the ladder from the line set in Game 1 (PHX -4.5).

The total for Tuesday’s event has risen to OU 224 – which ties the highest mark set for a playoff matchup containing either of these teams this year (U 224 vs UTA, U 224 vs DEN). 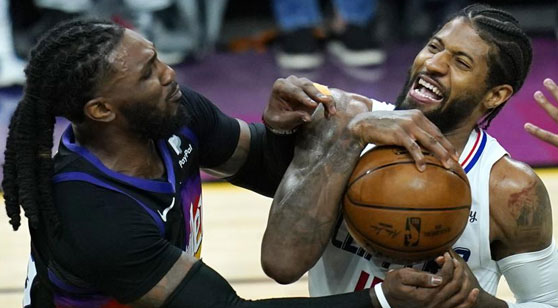 The Clippers look to even things up with the Suns at 1-1 on Tuesday night in Phoenix. (AP)

After admirably knocking off the defending champs in six games to open the postseason, the Suns brought that same imposing energy into their second-round matchup against the Nuggets – throttling Denver by an average of 15.5 points per victory across the brief four-game sweep.

L.A.’s representation in the Western Conference Finals, on the other hand, is rather surprising, considering the Clippers have trailed two-games-to-none in both of their postseason matchups so far – in addition to losing Kawhi Leonard (knee) down the stretch of a tight series against Utah.

The bumps and bruises from the Clippers’ previous 13 playoff games finally caught up to them in their series opener against Phoenix, as Paul George managed to keep L.A. competitive for most of the event by scoring 33 points on 48% from the field across the first three quarters – resulting in Game 1 going to the fourth tied at 93 apiece.

George completely ran out of gas in the fourth though – as the seven-time All-Star posted a goose egg from the field in the final stanza (1 point, 0-5 FG), which seemingly paved the way for Phoenix to create a decent amount of separation down the stretch and escape with a narrow cover.

Ironically, L.A.’s two regular-season victories over Phoenix were all about George, considering P.G. racked up an average of 36 points on 63% shooting in those events – compared to Kawhi’s average of 21 points on 34% across them.