The Western Conference Finals will resume on Saturday night with the Suns and Clippers set to square off at the Staples Center for a pivotal Game 4 at nine o’clock Eastern time on ESPN.

After bouncing back from consecutive road losses with a gutsy home win in Game 3, the Clippers return to the Staples Center for Game 4 of this series as a one-point underdog against the visiting Suns – which is roughly the same line as Game 3 (LAC +1.5).

The over-under for Saturday’s event has fallen to OU 218.5 – marking the first time the total for a matchup containing either of these teams has been set below 220 since the first round of the playoffs. 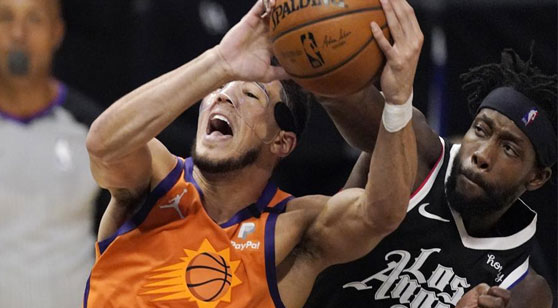 The Clippers look to capitalize off a Game 3 win as they seek a series split with the Suns on Saturday night. (AP)

In Game 2, L. A.’s supporting cast pulled remarkably more weight throughout the event to catapult Ty Lue’s team into contention – unfortunately, setting the stage for P.G. (26 points, 10-23) to shoot a pair of free throws that could potentially put the Suns down three points with the shot clock turned off in the fourth quarter.

George clunked them both though, ultimately giving Phoenix one last time down the floor with a chance to win it instead – and they did, as DeAndre Ayton caught a lob from Jae Crowder in the closing moments of the contest to seal L.A.’s third straight two-game deficit this postseason.

After missing the previous two contests with a covid-19 related absence, Chris Paul finally rejoined Phoenix’s lineup for Game 3 in Los Angeles – which had many wondering if the Suns were destined to crack out the brooms in a second straight series.

Devin Booker and Chris Paul were unusually terrible on the road in Game 3 though, as Phoenix’s superstar backcourt combined for just 30 points on 10-of-40 from the field at the Staples Center this past Thursday – consequently paving the way to a double-digit home victory for the Clippers.

After eliminating the Nets in thrilling Game 7 though, the Bucks (+110) immediately leapfrogged Phoenix (+150) as this year’s stand-alone title favorite.

Shortly after, the Suns (+110) dominated L. A. in back-to-back home matchups to start the Western Conference Finals – which left us with a set of co-favorites to take home this year’s title.

Even after Milwaukee dropped Game 1 of the Eastern Conference Finals at home – the Bucks and Suns are still deadlocked as this year’s current title favorite at +140.

After following up back-to-back losses with a win to open their third consecutive playoff series, the Clippers officially have basketball fans wondering if Lue actually devised some wicked new strategy for his team to sneak through the postseason – or if his squad is simply prone to starting slow in extended matchups.

I would argue though, that despite pulling off the upset in Game 3, the Clippers’ slow start somewhat lingered at the Staples Center this past Thursday – considering Phoenix stayed competitive throughout a contest Paul and Booker shot a combined 10-of-40 in.

After going off for a monster 40-point triple-double in Game 1 against the Clippers, Booker went ice cold at the offensive end in Games 2 and 3 – averaging just 17.5 points on 27% from the field across those events.

I’ll back him to have a big night in Game 4 though, as shots are bound to start falling for Phoenix’s superstar – and in Booker’s case, they typically fall in bunches.

After bouncing back from consecutive losses in The Valley with a win at home in Game 3, the Clippers return to the Staples Center for Game 4 as a one-point underdog against the visiting Suns.

I’ll lay the point with the Suns here, as Paul and Booker combined for just 30 points on 10-of-40 from the field during their somewhat competitive loss in Game 3 – and I have to imagine Phoenix’s superstar tandem is just a ticking timebomb heading into Game 4.