The Eastern Conference Finals will resume at State Farm Arena on Sunday night with the Bucks and Hawks set to square off for a pivotal Game 3 at 8:30 Eastern time on TNT.

After winning Game 2 by 34 points in Milwaukee, the Bucks travel to Atlanta for Game 3 as a four-point favorite over the Hawks at State Farm Arena – marking the heftiest underdog tag given to Atlanta at home this postseason.

The total for Sunday’s event has fallen to OU 224, which is the lowest bar set for a matchup in this ECF series so far. 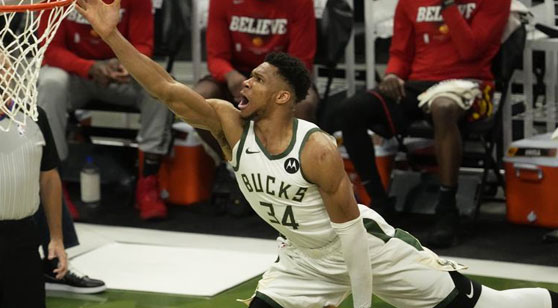 Giannis Antetokounmpo and the Bucks seek a 2-1 series lead with a road win at Atlanta on Sunday night. (AP)

After a pair of grueling seven-game victories over heavily favored opponents in the previous round, Milwaukee and Atlanta surprisingly emerged from their respective Game 7’s as the final two teams standing in the Eastern playoff bracket – setting the stage for a somewhat unforeseen conference finals matchup.

All that said, the oddsmakers still went all-in on Milwaukee from the jump in this year’s ECF – tagging the Bucks as eight-point favorites in Game 1 while listing them as a -500 favorite to win the series.

Milwaukee’s balloon was quickly popped by a loss to the Hawks in Game 1 though, as Giannis Antetokounmpo and Jrue Holiday combined for a stealthy 67 points on 56% shooting across Wednesday’s series opener – but it wasn’t quite enough to fend off Atlanta’s late-game scoring invasion propelled by Trae Young (48 points).

In Game 2, the Bucks came ferociously charging back, as Milwaukee responded with a commanding 34-point victory at home this past Friday – deadlocking these teams at one game apiece heading into Sunday’s pivotal third matchup.

After upsetting Brooklyn in the previous round as hefty underdogs, the tables have been turned on Milwaukee in its current matchup – as the Bucks (-500) entered this year’s Eastern Conference Finals generously favored to advance past Atlanta (+375).

Following a two-game split in Wisconsin to open this series though, both of those prices have been moderately adjusted – with Milwaukee still coming in as a sturdy favorite (-360) and Atlanta (+270) trailing a ways behind.

After finishing up the regular season even with New York in the standings at 41-31, the Hawks stumbled out of the gate in The Big Apple to start their first-round series – as Atlanta took down the Knicks in Game 1 at MSG behind Young’s game-winning floater, which was followed by a disappointing nine-point loss in Game 2.

Atlanta played the rest of the opening two rounds with a chip on its shoulder though – stomping New York by an average of 14 points in three straight victories to close out the first, which was followed by a gutsy seven-game series win over the top-seeded Sixers in the second.

That being said, Atlanta (+375) went into this ECF series as a massive underdog against Milwaukee (-500) – and despite splitting their previous two contests at Fiserv Forum, the oddsmakers appear to still lack a considerable amount of faith in the Hawks to win in this matchup (+270).

After exploding for 33 points on 56% shooting in Milwaukee’s series-opening loss, Holiday was heavily involved in the offensive game plan again in Game 2 – carving up Atlanta’s frontcourt for 22 points on 9-of-14 from the floor during the Bucks’ blowout victory on Friday.

I’ll back Jrue to keep it going here, as he’s basically scored at will throughout the first two games of this series – and I doubt that will change, considering Atlanta has bigger fish to fry at that end of the floor.

After bouncing back from a heartbreaking loss in the opener with a blowout win in Game 2 (+34), the Bucks travel to Atlanta for Game 3 of the Eastern Conference Finals as a four-point favorite over the Hawks at State Farm Arena.

I’ll lay the points with Milwaukee here – as in my opinion, Atlanta’s thrilling victory to open this series felt much flukier than Milwaukee’s dominant performance in Game 2 this past Friday.