Western Conference Finals will resume on Monday night with the Clippers and Suns set to square off in The Valley for a potential series-ending fifth matchup at nine o’clock Eastern time on ESPN.

After pushing L.A. to the brink of elimination by winning a hard-nosed defensive battle at the Staples Center in Game 4, the Suns travel back to Phoenix for Game 5 as a 5.5-point favorite over the visiting Clippers – which is the heftiest number either team has been favored by in this WCF series.

The over-under for Monday’s event has fallen to OU 215 – marking the lowest total for a matchup containing either of these teams since the opening postseason round. 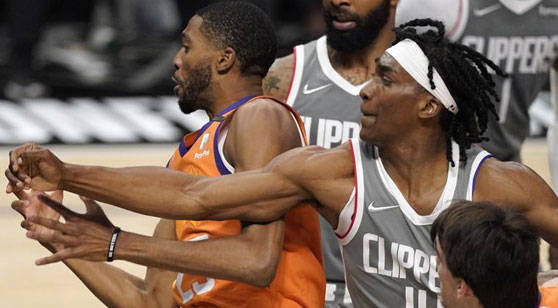 The Clippers look to stay alive as they trail the Suns, 3-1 headed back to Phoenix for Monday's Game 5. (AP)

In Game 2, the Clippers’ supporting cast pulled remarkably more weight throughout the event to catapult them into contention – unfortunately, setting the stage for P.G. (26 points, 10-23) to shoot a pair of free throws that could potentially give his team a three-point lead with the shot clock turned off in the fourth quarter.

George clunked them both though, which instead gave Phoenix one last time down the floor to win the game – and they did, as DeAndre Ayton caught a lob from Jae Crowder in the closing moments of the contest to seal the Clippers’ third two-game deficit of the playoffs.

After missing the first two matchups of this series due to the league’s health and safety protocols, superstar Chris Paul returned to the Suns’ lineup in Game 3 – but surprisingly, he and Devin Booker posted dreadful numbers from the field throughout the event, as Phoenix’s superstar duo combined for just 30 points on 10-of-40 from during their team’s double-digit loss at the Staples Center.

Booker and Paul were relatively underwhelming again in the following matchup, as the dup racked up just 43 points on 14-of-44 shooting in Game 4.

This time around though, the Clippers backcourt nearly matched the duo’s sluggish offensive outing, as P.G. and Reggie Jackson scored over half of L.A.’s points on 29.5% from the floor in the event – never giving the Clips’ much of a chance on the way to their third loss of this series (84-80).

After blowing a 3-1 lead in the second round against Denver last postseason, L.A. now sits on the opposite side of that same deficit against the red-hot Suns in this year’s WCF – which appears to be all she wrote for the Clippers this year.

If there’s a team capable of fooling bettors one last time though – it’s undeniably the Clippers, considering L. A. went down 0-2 in both previous playoff series before rallying back in win five-of-six games to close them out (Dallas, Utah).

I doubt L. A. has another full comeback in them, but if there’s one thing the Clippers have shown us this postseason, it’s that they are extremely resilient – and personally, I would refrain from betting against them on the brink of elimination here.

After eliminating the Nets in thrilling Game 7 though, the Bucks (+110) immediately leapfrogged Phoenix (+150) as this year’s stand-alone title favorite.

Shortly after, Phoenix (+110) dominated the Clippers in back-to-back matchups to start the Western Conference Finals – eventually leaving us with a set of co-favorites to take home this year’s title.

Now that Phoenix sits on the verge of punching its ticket to the NBA Finals though, the Suns (-112) have officially surfaced as the stand-alone title favorite – but that very well could change as both conference finals series continue to play out.

After averaging 23 points on 54% shooting across his previous five outings, Jackson couldn’t get his jump shot going at the Staples Center in Game 4 this past Saturday – scoring just 20 points on 8-of-24 from the field during the Clippers’ frustrating third loss of this series.

I’ll take Reggie to bounce back here though – as the dynamic guard has failed to score 20 points in just one contest since Kawhi’s latest injury.

After dropping three heartbreakers to open this series by roughly 3.7 points per loss, the Clippers travel to Phoenix for Game 5 of the Western Conference Finals as a 5.5-point underdog against the Suns in The Valley.

I’ll take the points with L.A. here – as Monday’s Game 5 should at least turn out highly competitive with the Clippers sitting on the brink of elimination again.