The Eastern Conference Finals will resume in Milwaukee this Thursday night with the Bucks and Hawks set to square off for a pivotal Game 5 at 8:30 Eastern time on TNT.

Despite dropping Game 4 in Atlanta by 22 and losing Giannis Antetokounmpo due to a knee injury in the process, the Bucks travel back to Wisconsin for Game 5 of the Eastern Conference Finals as a two-point favorite over the visiting Hawks – marking the smallest amount Milwaukee has been favored by in this series.

After the first three matchups of this ECF series contained over-unders set in the 220’s, the total for Thursday’s event is currently stationed at OU 215.5 – which is roughly the same low bar that was set for Game 4 this past Tuesday (U 216). 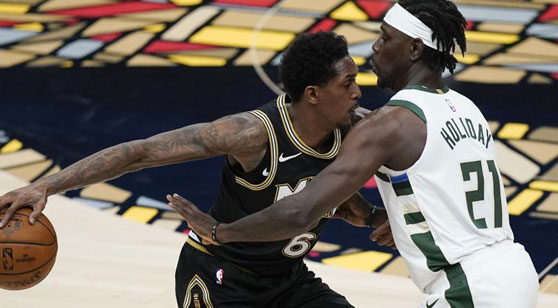 The Hawks travel back to Milwaukee tied at 2-2 after blowing out the Bucks in Game 4. (AP)

That enormous wager wasn’t looking great after Game 1 too, as Antetokounmpo and Jrue Holiday combined for an impressive 67 points on 56% shooting across Wednesday’s series opener – but it wasn’t quite enough to fend off Atlanta’s late-game scoring invasion propelled by Trae Young (48 points).

In Games 2 and 3, Milwaukee came ferociously charging back as the Bucks swiftly turned the tables on Atlanta with a pair of commanding double-digit victories in the following two matchups – leaving the Hawks in an extremely tough spot at home in Game 4, especially without Trae in the lineup.

The Hawks already led by double-digits when Giannis’ injury occurred – but after Milwaukee’s superstar suffered a worrisome knee injury in the third quarter of Game 4, Atlanta quickly sped away with an imposing blowout victory to even up this series at two games apiece, leaving bettors with an enormous amount of uncertainty heading into its pivotal fifth matchup in Wisconsin.

Despite knocking off the top-seeded Sixers in the previous round, Atlanta (+375) still entered this year’s Eastern Conference Finals as heavy underdogs against Milwaukee (-500).

Those prices were both briefly chopped in half following Atlanta’s thrilling win in Game 1 at Fiserv Forum (-200/+170) – but after rumbling back with two straight double-digit victories in Games 2 and 3, the Bucks (-2000) quickly returned to their pedestal of heavy favorites over Atlanta (+900).

With Antetokounmpo and Young’s respective injury statuses still appearing incredibly vague ahead of Game 5 though, the odds for this year’s ECF have taken another dramatic turn – as Milwaukee (-116) currently heads into Game 5 an extremely narrow favorite to advance past Atlanta (-102).

Fortunately, it was reported that Milwaukee’s superstar didn’t suffer any structural damage to his knee on the play – but the Bucks suffered a crushing blow in the third quarter of Game 4 this past Tuesday, as Antetokounmpo got tangled up with Clint Capela on a lob attempt and was forced to make an early exit from the contest.

Even if Giannis can’t make a speedy recovery, I still give Milwaukee a good chance at knocking off Atlanta with two games left to be played at Fiserv Forum down the stretch of this series – and given Young’s vague injury status.

The Bucks (-114) still went into Game 4 on Tuesday as the stand-alone favorite to win the title though – and unless Antetokounmpo’s injury turns out to be virtually nothing, I have to imagine Milwaukee’s (+325) days of being favored over Phoenix (-155) are over.

After going 8-of-16 from downtown in his first two home matchups of this ECF series, Holiday significantly cooled off from that area on the road in Games 3 and 4 – going just 2-of-10 from beyond the arc across his latest two outings in Atlanta.

I’ll take Jrue to bounce back here though – as I expect him to be far more pressing at the offensive end without Antetokounmpo on the floor in Game 5.

Despite dropping Game 4 in Atlanta by 22 and losing Antetokounmpo due to a knee injury in the process, the Bucks travel back to Wisconsin for Game 5 of the Eastern Conference Finals as a two-point favorite over the visiting Hawks – marking the smallest amount Milwaukee has been favored by in this series.

I’ll lay the points with the Bucks here, as the last thing Milwaukee wants to do is travel to Atlanta for Game 6 resting on the brink of elimination – and I still think they could potentially win this series without Giannis.