The Eastern Conference Finals will resume in Milwaukee this Saturday with the Bucks and Hawks set to square off for a critical sixth matchup at 8:30 Eastern time on TNT.

After dropping Game 5 by double-digits in Milwaukee, the Hawks travel back to State Farm Arena for Game 6 as a two-point favorite over the visiting Bucks – marking the first time Atlanta has been favored since Game 4 of the opening round against New York (ATL -5).

The total for Saturday’s event is currently stationed at OU 216.5 – which is the third straight matchup in this series with a bar set below 220. 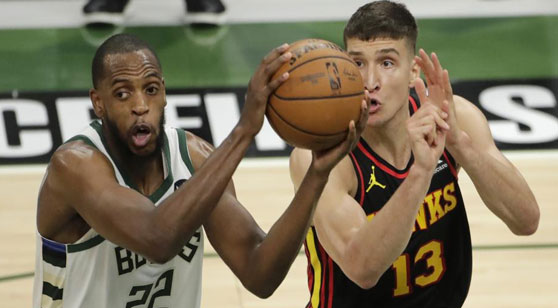 The Bucks are one victory away from reaching the NBA Finals as Milwaukee leads Atlanta, 3-2. (AP)

That enormous wager wasn’t looking great after Game 1 too, as Giannis Antetokounmpo and Jrue Holiday combined for an impressive 67 points on 56% shooting across the series opener – but it wasn’t quite enough to fend off Atlanta’s late-game scoring invasion propelled by Trae Young (48 points).

Milwaukee came ferociously charging back in Games 2 and 3 though, as the Bucks swiftly turned the tables on Atlanta with a pair of commanding double-digit victories in the following two matchups – leaving the Hawks in an extremely tough spot ahead of Game 4, especially with Young absent from the lineup.

Atlanta already led by double-digits when the injury occurred, but the Bucks took a devastating blow in the second half of Game 4 when Antetokounmpo suffered a worrisome knee injury that led to his exit from the event – in turn, enabling the Hawks to run away with a 22-point victory to even up this series at two games apiece.

Despite the superstar’s absence, the Bucks still rallied back with a double-digit victory at home in Game 5 though, as Brooke Lopez and Bobby Portis teamed up for 55 points on 61% shooting to fill Antetokounmpo’s void in the frontcourt during the event – handily shoving Atlanta to the brink of elimination heading into Game 6 at State Farm Arena.

Fortunately, it was reported Milwaukee’s superstar didn’t suffer any structural damage to his knee and he still could return this postseason – but the Bucks’ worst nightmare painfully came to fruition in Game 4 this past Tuesday, as Antetokounmpo got tangled up with Clint Capela on a lob attempt in the second half and was forced to make an early exit from the contest.

After taking care of business at home in Game 5 though, the Bucks (-435) have reemerged as heavy favorites to punch a ticket to this year’s NBA Finals – while also getting bumped up to narrow underdogs (+180) against Phoenix (-175) to win it.

Despite knocking off the top-seeded Sixers in the previous round, Atlanta (+375) still entered this year’s Eastern Conference Finals as heavy underdogs against the Bucks (-500).

Those prices were both briefly chopped in half following the Hawks’ thrilling win in Game 1 at Fiserv Forum (-200/+170) – but after rumbling back with two straight double-digit victories in Games 2 and 3, the Bucks (-2000) quickly returned to their pedestal of heavy favorites over Atlanta (+900).

The vagueness surrounding Antetokounmpo and Young’s respective injuries moderately shortened up those prices – but even with Trae expected to participate in Saturday’s affair, the Hawks (+320) still enter Game 6 as hefty underdogs to make it out of the series.

After averaging 6.7 points on 5.3 field-goal attempts in the first three matchups of this series, Bogdan Bogdanovic has admirably filled the role of Atlanta’s primary scoring threat during Young’s latest absence (foot) – racking up an average of 24 points on 15 shot attempts across Games 4 and 5 against Milwaukee.

I’ll back Bogdanovic to keep it going here – as even if Trae suits up for Game 6, I still expect Bogdanovic to play a crucial role in the Hawks’ offensive attack.

After dropping Game 5 by double-digits in Milwaukee, the Hawks travel back to State Farm Arena for the sixth matchup of this series as a two-point favorite over the visiting Bucks – marking the first time Atlanta has been favored since Game 4 of the opening round against New York (ATL -5).

I’ll take the points with the Bucks here – as even if Young ends up making a hobbled return for Saturday’s matchup, I still think Milwaukee has a decent shot at closing out this series on the road in Game 6.