The Sixers end their road trip still in survival mode down a bunch of starters – including Joel Embiid. The Warriors are in domination mode as they have the best record in the league. The two teams tip off 10 p.m. ET Wednesday night on ESPN.

It’s been the same theme for the Sixers this road trip – play hard and at least keep up with most teams despite being down some starters. They were able to outplay an already bad Kings team, but the Warriors are the complete opposite. Tyrese Maxey has stood out with so many starters, but Golden State is healthy and ready to compete. While Tobias Harris is possible to return, Seth Curry and Danny Green look to be out, and allow a great battering ram for the Warriors wings. No Embiid means Andre Drummond will have to play extended minutes.

Golden State has Stephen Curry – but it’s also been a lot of supporting cast members who have picked up scoring slack. The Sixers won’t have the talent to keep up offensively outside of Maxey and some shooting from Georges Niang and Furkan Korkmaz. The Warriors don’t need to outscore much productivity from Philadelphia, and Curry may do enough of it on his own. Draymond Green can continue to enforce one of the league’s tougher defenses against a struggling Sixers frontcourt.

It’s been tough to gauge the Sixers from a metrics standpoint mainly because of so much volatility in their lineups. Embiid is out for the road trip, but Harris has been hit-or-miss in playing games during this stretch. Curry and Green are expected to sit, making offense tough to come by from behind the arc. Doc Rivers has the team fighting on defense, and role players are stepping up in spurts. The reality is that it catches up to them when they take on better teams, and there isn’t a better team in the league than the Warriors. Drummond may be able to keep the Warriors off the boards but isn’t a threat to alter anyone’s shot.

The Warriors are playing some of the best basketball in the NBA, and they are doing it all at home. Golden State keeps winning games at home, four straight overall and eight straight at home. The team hasn’t missed Klay Thompson or James Wiseman during this opening stretch, and Curry is putting up MVP numbers. The only vulnerability may be up front with some legit size, but it hasn’t hurt them during the season. The Warriors are top-5 in 3-point percentage, once again pouring in threes at a ridiculous clip. 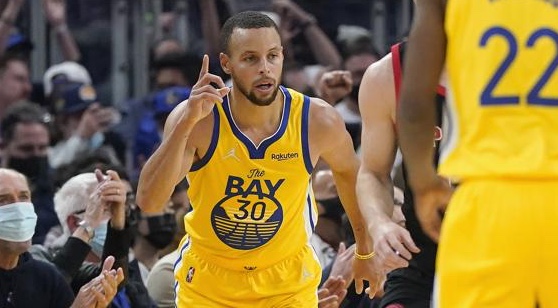 The first matchup between these two teams will be Wednesday night in San Francisco. The Warriors have won four straight overall and eight straight at home. The Sixers can secure a .500 record on their road trip with a win over Golden State.

The Warriors have the top record out west, but they also have one of the league’s best records ATS at 12-4-1. They cover the majority of numbers, no matter how big they may be. The Sixers put a lot of effort into beating the Kings and may have another letdown coming on their final road game of the trip. The Warriors are top heavy with Curry, Wiggins, and Poole providing pretty much all of their scoring. The Sixers don’t have enough

to stop Steph Curry, and without Harris, may not have enough to stop Wiggins either.