After finishing fifth in the East with a record of 41-31 SU last year, Atlanta stumbled out to a surprisingly poor start to the season, as the Hawks kicked things off with a lackluster 4-9 SU and 3-10 ATS skid – with seven of those SU losses coming by nine points or more.

The Hawks have played solid basketball since their opening skid though, considering Atlanta enters Monday’s event 11-8 SU and 10-9 ATS across the last 19 games – despite sitting at 2-5 SU across their last seven.

On the other hand, Chicago jumped out to a much-improved start to the new season, as the Bulls opened with a solid 12-5 SU and ATS run – despite getting tagged as underdogs in eight of those matchups.

The Bulls have cooled off a bit across their latest stretch though, considering Chicago is just 8-5 SU and 7-6 ATS across the last 13 games – while getting tagged as favorites in ten of those matchups.

I’ll lay the points with Chicago here, as the Hawks are 2-5 SU and ATS across their last seven games, while averaging just 105.8 PPG across that timeframe – which doesn’t bode well as they host a Bulls’ squad that’s 7-2 SU and 6-3 ATS across the last nine games, with three wins coming by 10+ PTS.

After finishing 11th in the East with a record of 31-41 last year, Chicago elected to go out and make some aggressive offseason acquisitions, which resulted in a fully rejuvenated Bulls squad – as Zach Lavine now finds himself partnered up with a stout supporting cast that consists of Lonzo Ball, DeMar DeRozan, Nikola Vucevic, Alex Caruso and other solid counterparts.

Clearly, the Bulls’ new roster construction still contains flaws, but they seem to be headed down the right track, considering Chicago ranks second in the conference with a record of 19-10 SU, trailing the Nets for the top spot by just two games.

They ended up falling just short in the conference finals, but the Hawks still undeniably blossomed into legitimate threats in the East during their impressive playoff run, considering Atlanta dominated the Knicks in a five-game set in the first round – and then stunned the top-seeded Sixers in the second.

Atlanta quickly reverts to mediocrity without Trae Young on the floor though, considering the Hawks enter Monday following losses in five of last seven games – while averaging just 105.8 PPG across that stretch. 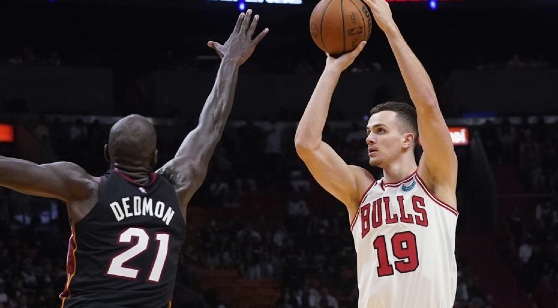 The Hawks swept a three-game regular-season set against Chicago last year, with the first two matchups going over the total set for Monday’s affair at an average of 228 PPG – while the finale stayed well under with a score of 108-97.

After an embarrassing Christmas Day performance at MSG (L, 101-87), the Hawks will travel back home for Monday’s contest as narrow home underdogs against the visiting Bulls – marking the third straight game Atlanta has been an underdog in.

I’ll lay the points with the Bulls here, as despite Chicago playing with a rest-disadvantage on the road, the Hawks are nearly impossible to trust offensively with the absence of so many vital scoring options.