After finishing third in the West with a record of 47-25 SU last year, Denver kept that same ball rolling with another excellent start to this season, as the Nuggets opened with a solid 9-4 SU and 7-6 ATS run – which included impressive upset victories over the Suns, Jazz, Grizzlies, and Heat.

Denver has looked like a shell of that squad since their opening stretch though, considering the Nuggets are just 12-15 SU and 10-17 ATS across the last 27 games – with ten of those SU losses coming by double-digits.

On the other hand, Los Angeles stumbled out to a lackluster start following the groundbreaking acquisition of Russell Westbrook, as the Lakers opened with a disappointing 10-11 SU and 7-14 ATS skid – despite getting tagged as favorites in 12 of those matchups.

Los Angeles maintained a similarly deficient pace through the Holidays too, as the Lakers enter Saturday’s matchup sitting at 11-10 SU and 10-11 ATS across their latest 21-game stretch – yet the oddsmakers refuse to give up on them, considering they were favored in 17 of those affairs.

I’ll back L. A. on the road here, as prior to Denver’s 140-point outburst against Portland on Thursday, the Nuggets scored 100 PTS or less in three of their last five games (100.6 PPG) – which sets the stage for an unfavorable home matchup against a Lakers squad that’s racked up 123 PPG across its latest 4-2 SU stretch.

Regardless of the circumstances, hovering at .500 is a disappointment for this new-look Lakers’ squad, but to be fair, they’ve been banged up from the start, so it’s tough to write them off completely, considering LeBron James has already missed 12 games this year – while AD has missed 15, and still slated to miss more time with an MCL sprain.

There’s still plenty of time for the Lakers to turn things around and push for a higher seed; they just need to get healthy first – and ultimately, shoot the ball better, considering L. A. currently ranks 21st in offensive efficiency and 14th in three-point percentage (1.058 OE, 35.2% 3FG).

Despite the year-long absence of Jamal Murray, Denver has managed to stay afloat through the first half of the season, as the Nuggets currently rank 6th in the West with a record of 21-19 SU – pacing the Clippers, Lakers, and Timberwolves all by two games or less.

Denver always wields the ability to keep things competitive with a healthy Nikola Jokic at the helm, but clearly, we should expect far less when additional pieces are banged up such as Michael Porter Jr., Will Barton, and P.J. Dozier – highlighted by the Nuggets averaging just 102 PPG across their latest 5-5 SU and 3-7 ATS skid. 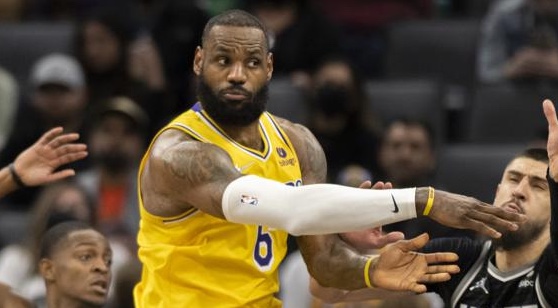 The Lakers are 8-2 SU in their last ten matchups against Denver. (AP)

The Lakers won two-of-three regular-season matchups against the Nuggets last year, with both of L. A.’s victories staying well under the total at an average of 194.5 PPG – and Denver’s lone win soaring over with a score of 122-105.

After posting back-to-back losses against the Grizzlies and Kings, the Lakers will hit the road on Saturday night as narrow underdogs against the Nuggets at Ball Arena – marking the first time L. A. has been an underdog since December 29th.

I’ll back L. A. on the road here, as the Lakers are 5-3 SU across their latest eight-game stretch, while averaging a lofty 121.1 PPG during that timeframe – while the Nuggets have generated 120 PTS or less in ten of their last 14 showings (101.9 PPG).