When talking about NFL futures at the end of each summer, the conversations in the betting markets tend to always be the same. They focus on how every year there are always a new handful of NFL teams in the playoffs that weren't there the previous year and discussions focus on who those “new arrivals” will be in the coming year.

Don't get me wrong, the concept of going through that exercise isn't wrong and can provide value, as last year we saw Pittsburgh, Cleveland, Indianapolis, Washington, Tampa Bay, L.A. Rams, and Chicago all make it to postseason football after not doing so after the 2019 season. Not all of these teams are division champions obviously, but the flip side of the equation here rarely, if at all ever gets addressed; If about half of the NFL playoff teams are “new arrivals”, it means the other half are teams that did make it to the playoffs a year ago. Who are those teams going to be?

Well, that was a question I posed to myself when doing research for this year and having backtracked things all the way back to that solid end point of realignment (2002-03) I found some very interesting things, including an idea that has worked 100% of the time in those 19 seasons. It relates to eventual division champs and since that's another betting market bettors can attack, let's start there.

Since 2002-03 season, at least one NFL team that had their season end with a home playoff loss has gone on to win their division the following year.

No team in any sport likes to see their season end on their own turf, and in NFL terms, it generally means that said team is a strong one that were maybe a piece or two away from going further, didn't have their best effort in that home playoff game etc. So typically speaking, backing these teams to use that home playoff defeat as season-long motivation the next year isn't a bad idea. A home playoff game in the NFL typically means the team was a division winner a year ago as well, so there generally are at least some strong reasons to like their prospects the following year.

Going into the 2020 NFL season, Philadelphia, New Orleans, New England, and Baltimore all had their 2019 campaigns ended with a home defeat, and 2020 saw the New Orleans Saints continue this 100% trend in claiming the NFC South. They were the only ones to do so a year ago, but after 2018 playoff home losses by Baltimore, Houston, Kansas City, Chicago, and New Orleans, 2019 division champs included every one of those teams except Chicago.

It goes that way throughout the entire history of the NFL since realignment in 2002-03, as even in that first season (2002-03) we had Green Bay and Philadelphia as the only two teams to lose a playoff game at home, and both went on to win their respective divisions the next year. Every season at least one organization has continued that pattern along the entire way.

The Tennessee Titans, Pittsburgh Steelers, Washington Football Team, New Orleans Saints, Seattle Seahawks, and Green Bay Packers all saw last year end with a home playoff loss, so for this 100% trend of at least one team off a home playoff loss winning their division the following year to continue, picking any division winners this year should start with this list.

These are the current prices for all these teams to win their respective divisions in 2021:

Considering the Packers and Titans both come into the year as the chalk for division futures, chances are this 100% trend gets extended through this season, but there was never a distinction made between those past division winners off a home playoff loss and whether or not they were favored to win the division the following year. There have been some years where it's been the team with the biggest price on the list (in this case Pittsburgh at +450) that managed to continue the run.

So that got me searching for other potential variables to narrow this list down and what (if anything) could be related to what we already know for the 2021 season. Which brings me to this:

Now those percentages are league-wide and unrelated to whether or not said team finished the previous year with a home playoff loss, so keep that in mind as well. For any division futures bet, you'd better hope they win outright in Week 1 because it's connected 77.5% of the time these past five years. It's a streak that went a perfect 8-for-8 last year, and was 7-for-8 in 2019, with only the 2019 Houston Texans losing outright in Week 1 and then going on to win their division.

But throwing that percentage on top of the 100% angle on teams off a home playoff loss can help further narrow down that list of six teams for bettors that are interested in doing so, simply by looking at their Week 1 lines.

Thanks to Aaron Rodgers returning to Green Bay, the Packers have now flipped to a -130 ML favorite in Week 1 over New Orleans, in a game that features two teams from that six-team list. Figure out the outright winner there (New Orleans is +110) before hand and any division futures wagers on those teams will have the 100% and 77.5% angle supporting you the rest of the way.

Considering everything else involved with those two teams and their division prospects (Green Bay having lesser competition to go through in the NFC North vs New Orleans in the NFC South), it's hard to not like pulling the trigger on a Packers division bet right now. But it's also a Week 1 game for both teams that's not against a division rival or non-conference team, meaning that 62.6% angle these past five years is working against both sides.

Pittsburgh is another team playing a conference game against a non-division team in Week 1 as they are catching +6.5 at Buffalo to begin the year. Any Steelers division futures bet already has plenty of concern given they've got to deal with Baltimore, Cleveland and even Cincinnati this season, but as a near touchdown underdog in Week 1 (ML of +230), the implied probability of the Steelers winning outright in Week 1 is just 30.3%.

That's not ideal in regards to being on the right side of that Week 1 winner 77.5% angle, and with everything else to consider with the Steelers (aging Ben Roethlisberger, quality division competition etc etc), I don't know how you could pull the trigger on a Steelers to win the AFC North bet right now.

The other three teams on that list of teams off a home playoff loss last year – Tennessee, Seattle, and Washington – do have all three angles (off home playoff loss, playing a division rival or non-conference foe) and potential for a Week 1 win – generally working in their favor.

Washington hosts the L.A. Chargers and their new coaching regime in Week 1 in a non-conference game where the spread has been floating around pick'em for most of the summer. Currently you can find Washington around +105 on the ML for that Week 1 game, and with that ML price suggesting a 48.78% implied win probability for Washington, if they are able to start the year 1-0 SU and use that strong defense to suffocate the rest of their NFC East division rivals who have made the choice to be more offensive-minded teams, then a +200 ticket on Washington to win the NFC East again this year could easily have some value come the end of the year.

But it's Tennessee (-2.5 home favorites; ML of -150 vs Arizona) and Seattle (-3 road favorites; ML -150 at Indianapolis) in Week 1 where those three historical ideas merge together quite well. 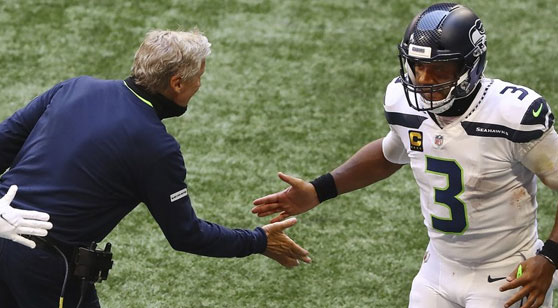 Russell Wilson and the Seahawks travel to Indianapolis as a short favorite to kick off the 2021 season. (AP)

Seattle's got the much tougher path to a division title this year between the two, especially with the recent news out of Colts camp that Carson Wentz is hurt again. But the division prices already account for part of that, and while the Rams are a team many are very high on this year, QB Matthew Stafford has never once won a division title in his career.

While I know there are plenty of circumstances out of Stafford's control as to why that's been the case (playing in the same division as Rodgers in his prime), I've got no faith that anything will change for Stafford there despite the change of scenery, and with John Wolford, Bryce Perkins, and Duck Hodges behind him on the QB depth chart in L.A., how confident will anyone be holding a ticket on the Rams to win the division if the oft-injured and fragile Stafford misses time again this year?

Just can't see any value in the +190 price on the Rams to win the NFC West, no matter how many others are willing to tell me otherwise. And considering Seattle's home playoff loss came at the hands of this Rams team, who knows, maybe that's another layer of motivation for Seattle QB Russell Wilson and company to work off of in 2021.

The Seahawks other expected competition in the NFC West are the San Francisco 49ers (+190 to win West), but given the history of FCS QB's in the NFL (they tend to only have one “great” year in NFL) and San Fran's top two QB's on their depth chart coming from the FCS college ranks, it's not likely that that one “lightning in a bottle” season that FCS QB's typically have in their careers is going to be this year for the 49ers, no matter if it's Jimmy Garoppolo or Trey Lance taking the majority of snaps under center. I certainly don't trust it.

Which leaves the Seahawks, who could go back to gaining a few more leverage points this year in home field advantage at least with crowds generally returning, and a QB in Wilson that's done nothing but consistently win at this level.

A Week 1 win over the Colts is implied 60% of the time at a -150 ML price, and if they are able to do that over a non-conference team in Week 1, then all of a sudden any Seahawks division futures tickets have that 100%, 77.5%, and 62.6% angle already on their side. With Indy having to go with a backup QB in all likelihood in Week 1, a bet on Seattle at +275 to win the NFC West makes plenty of sense.

But the best bet of the bunch is backing Tennessee to win the AFC South again this season, and the Wentz news from Indianapolis has only made that thought more painfully obvious.

The Titans are going to likely face minimal resistance in the AFC South from the Texans and Jaguars to begin with, and if the Colts are short-handed without Wentz for a chunk of the season, even a supposed weak Tennessee defense shouldn't cost the Titans too much in their pursuit of another division crown.

Like Seattle, Tennessee opens up the year against a non-conference team (Arizona) and have a 60% implied probability of winning that opening game outright at the -150 ML price. Connect on that and it's Tennessee that's got all three of those angles working in their favor as well.