Similar to the SNF piece for Week 1 here, Week 2 brings us a Monday Night Football game that's yet again got a home side opening up a brand new building.

It's something that worked well for the Rams in that game, and it even had some left over magic to help the Chargers cover the number in their first game in the new digs. This time it's the Raiders turn to welcome football to a new stadium and city, all virtually on MNF.

Both LA teams went into their openers as home underdogs, and that's where the Raiders sit here. So can it really be as simple as following this new building run home teams have been on? 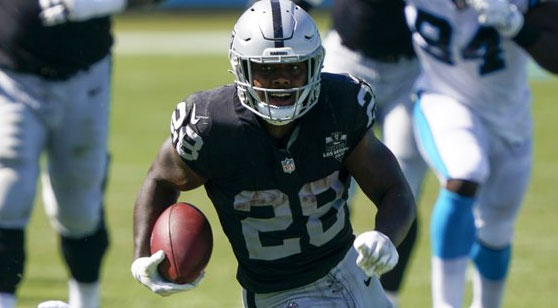 The Raiders return home off a victory at Carolina looking for a win in the underdog role against the Saints. (AP)

Tough to really love a play on either side of this total in my view, as these two teams could accidentally get into the 50's with how suspect their defenses can be, but the offenses may not be all that they appeared to be in Week 1 victories either.

The reputations of the Saints offense and Raiders defense alone will have some on the fence get shaded to the high side of the number and that was probably behind a bit of the thinking of having this number open up at 51 or higher almost everywhere.

The value has already been sucked out of the 'under' look, and we could see a late score by one side push this one to 49, 50 points etch where even thinking the number is still too high is rather risky. Easy enough to pass on, especially this early in a season with limited exposure already.

New Orleans benefited from turnovers in that win over the Bucs, getting seven of those 34 points directly from the defense. With Mike Thomas out, there is no safety net out there in Brees always knowing where he'll be and trusting him to come down with the ball. A struggling Saints offense would not surprise me at all here.

And Oakland's offense may not be spectacular considering they looked good against a very young Carolina team last week. So even with the value sucked out of the 'under' side of the number, any thoughts of backing the 'over' are still hard to be confident in as well. Game could easily land between the opener and the closing line and I'll let others have stake in that coin flip.

Saints vs. Raiders
Handicapping the Side

The side is never as easy as taking the home dog in their stadium opener, but at least in this situation it doesn't hurt the Raiders side at all.

Vegas has some internal confidence after winning in Carolina despite some ups and downs, and this Saints team is still one that's coming to town relying on an older QB without his #1 WR and the highest paid guy at the position in the game.

If that personnel scenario is already a knock on laying the road chalk in a spot that's recently treated home teams so well, from a team standpoint, this is a rough spot for the Saints to be in as well.

New Orleans is coming off a huge division game against the new face in town with Brady and the Bucs, travel cross country for a non-conference MNF game not at full strength and expected to win, and then go and have another highly hyped QB showdown SNF game next week when Aaron Rodgers and the undefeated Green Bay Packers come to town.

That's not a spot I want to be laying road chalk with any team, let alone a Saints team that I still have questions about offensively; even at full strength with Thomas.

So as conveniently and lazy as it is does sound to go once again with the ugly home side in their new building, that's the only way to really look in my opinion. The Raiders really catch quite a break in hosting this spot, and if normal attendances were allowed, you'd have to figure there would have been quite a nice home field advantage edge early based on that city's early response to the Vegas Golden Knights arriving in town.

I still believe this home field spot in Game #1 is worth more then inputted here, mainly as addition by subtraction ,in it being such a bad spot for the Saints team to come limping in that they deserve to have more shaved off their side of the line because of it.

No matter what the Raiders do this year, a Week 2 win over a Drew Brees led team is something that could shift the direction of their next few weeks in a positive way that even they really didn't expect. Taking advantage of a strong situational spot that's in their favor is something this team just has to know how to do.