The Las Vegas Raiders (5-5) and the Dallas Cowboys (7-3) meet in the middle game on Thanksgiving in Week 12 at AT&T Stadium in Arlington, Tex. Kickoff is scheduled for 4:30 p.m. ET, and the game can be viewed on CBS. 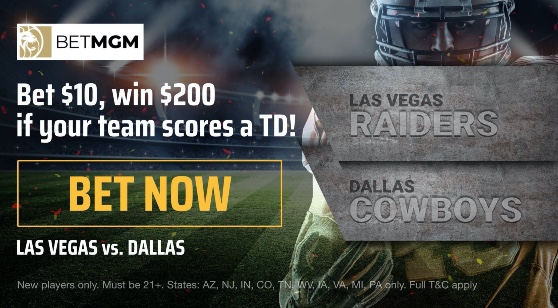 Perhaps all the tumult is getting to the Raiders. Las Vegas fired out of the chute with a 3-0 SU/2-1 ATS start, but then we had the Jon Gruden e-mail situation and the NFL investigation, and his subsequent firing. Then Henry Ruggs III was drunk and speeding, killing a woman in Las Vegas in the process. He was released. Then there was the Damon Arnette social media situation. He was released. The Raiders looked good in Denver following the Gruden firing, and came home to top Philadelphia the following week. Interim head coach Rich Biasaccia helped them wend through stormy weather and rough seas for a pair of wins, but the off-field distractions just kept coming, and look to be too much.

The Cowboys know a little about off-field distraction this week. Former Cowboys star and Hall of Famer Michael Irvin has been blasting WR Amari Cooper for not being vaccinated against COVID-19. The star wideout missed last week's game in Kansas City, and must be away from the team for 10 days due to league protocol, so he'll isolate this week, too, and will sit Thursday. With WR CeeDee Lamb suffering concussion in the end zone against the Chiefs, hitting his head hard on the grass while falling backward, the Cowboys could have some issues at the receiver position this week.

We might get an extra helping of RBs Ezekiel Elliott and Tony Pollard in a more ground-based attack than the Cowboys are generally used to. That makes the ears of potential UNDER bettors perk up. Run-heavy teams mean lower scores, generally, which total bettors look for.

The Raiders have taken the circuitous route to 5-5, starting out 3-0 SU, covering the first two, losing two and failing to cover three straight before a two-game win and cover streak. They've been in freefall the past three games, going 0-3 SU/ATS, and there are no signs of a turnaround. Vegas has 13, 14 and 16 on the scoreboard, and it all has gone to pot after entering MetLife Stadium in Week 9 against the New York Giants in first place at 5-2. They were stunned 23-16 by a beaten up and Giants team, and they haven't pulled out of the nosedive yet.

This is the first appearance on Thanksgiving for the Raiders since Nov. 28, 2013 when they were based in Oakland. The Raiders also faced the Cowboys that afternoon, losing 31-24 while covering as 10-point underdogs as the OVER connected.

The Cowboys were the last team NFL team to have a non-cover, opening the season with a perfect 7-0 ATS mark. They're actually 1-2 ATS across the past three, with both losses coming against AFC West Division teams. The Denver Broncos came to town as 10.5-point underdogs and fired out to a 30-0 lead before settling for a 30-16 road victory. It was one of the more shocking upsets of the season, especially how dominant Denver was to begin the game, and how useless the Dallas offense was. The showing angered the offense, as they came out and absolutely throttled the helpless Atlanta Falcons the following week, posting a 43-3 win and easy cover as 8-point favorites. The defense also had a point to prove, yielding a season-low in points.

Dallas needs a little of that anger again. It was humbled in Kansas City, losing 19-9, despite the fact the D mostly kept QB Patrick Mahomes and company in check. The offense did little, missing Cooper perhaps, but when Lamb went out the team had little identity in the pass game. QB Dak Prescott had WRs Michael Gallup, Cedrick Wilson and Noah Brown as his top wideouts, and the team appeared to miss OT Tyron Smith along the O-line, too. Dak was most comfortable with TE Dalton Schultz, who was by far the most productive player in the pass game, and you can expect that Dak to Schultz connection early and often again on Thursday.

As far as Turkey Day, the Cowboys were trampled by the Washington Football Team last season, falling 41-16 on Nov. 26, 2020, hitting the OVER for the fifth time in the past eight Thanksgiving Day games. Dallas is just 2-5 SU in the past seven Thanksgiving games, and the UNDER hit against Buffalo in 2019, and the L.A. Chargers in 2017. The last time the OVER hit on Thanksgiving for the Cowboys against an AFC team was 2014, against the Raiders. 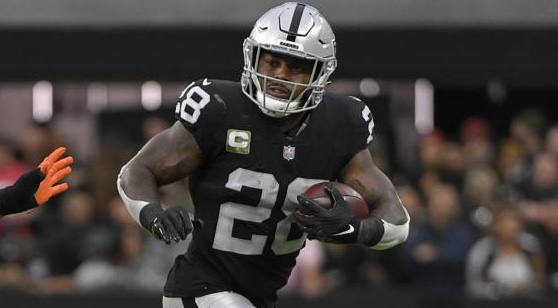 Inside the Stats - Dallas Cowboys

I think the Raiders pass attack has enough weapons to keep the Cowboys at least within a touchdown, and I think the Cowboys are going to be running the ball a lot more, with every scoring drive a chore. That is, unless Lamb miraculous whizzes his way through concussion protocol to play. It's not impossible to play Thursday after suffering concussion Sunday, but it's a rather tall order. I think we'll see a lot more defense, and a pretty entertaining game. Well, some of us will see it. Some will be in a turkey stupor, nodding in and out of a nap on the couch. Ha. Happy Thanksgiving, everyone!