The Carolina Panthers (5-11) are road underdogs in their final game of the season against the Tampa Bay Buccaneers (12-4). Kickoff is scheduled for 4:25 p.m. at Raymond James Stadium in Tampa Bay, Florida and can be viewed on CBS.

Unless you live under a rock, you’ve seen the clip of Bucs Antonio Brown stripping down and removing himself from last week's game against the Jets, a game Tampa Bay won by just four points. This is a big loss for Tampa Bay with Chris Godwin already out for the rest of the season. Tom Brady will have to rely on Rob Gronkowski and Mike Evans as his main targets. A win over Carolina and a Rams loss to the 49ers would give Tampa Bay back-to-back home games in the playoffs, something the city has not seen since 1979.

Carolina is coming off 18-10 loss to the Saints last week and have now lost six straight games. Sam Darnold is expected to get the final start of the season. Darnold threw for 132 yards, 0 TD, and 1 INT in last week's game. The Panthers have been eliminated from all playoff chances and currently hold the sixth spot for the 2022 NFL draft. A loss to Tampa Bay and a New York Giants win over Washington would move them up to the fifth spot, otherwise this is a meaningless game for the Panthers.

These teams met just two weeks ago with the Buccaneers winning on the road 32-6. Even with no Brown I don’t see the results being much different this week. Five of the six games of Carolina’s losing streak has come by eight points or more so I like the spread in this one. Tampa Bay has lost just one game at home this season to the Saints, the same game in which Evans, Godwin and Leonard Fournette were injured. Laying the points and backing the Bucs in this one.

Carolina has failed to cover in all six games of their losing streak, leaving them with a 5-11 ATS record on the season. The Panthers have not seen recent success against Tampa Bay with a 1-5 SU and ATS record in their last six matchups. The total has gone over seven times this year during Panther’s games, including five of their last seven.

Carolina’ offense has averaged just 10 points over the last three games. They just have not been able to bounce back after losing Christian McCaffrey to injury early on in the season. Entering the final week, Carolina is averaging 297.8 total YPG (30th), 189.5 passing YPG (29th), 108.3 rushing YPG (21st), and 17.9 PPG (29th). The Panthers have 27 turnovers on the season (31st) and the Bucs have forced 27 turnovers (6th), so they will need to be careful protecting the football.

The Bucs have been the center of attention this week after Antonio Brown dismissed himself from last week's game. They still managed to get the win against the Jets and have now won six of their last seven games. Tampa Bay has struggled covering on the road with a 3-6 ATS record but have been much better at home with a 5-2 ATS record. The Bucs have struggled at home against Carolina with a 2-6 ATS record in their last eight.

We’ve seen it time and time again throughout Brady’s career, man goes down so it's time for the next man to step up. I am a gambling man so I would bet that’s the mentality within the Bucs organization at the moment. The offense may slow down a bit this week adjusting to Brown’s absence but should still be able to handle the Panthers. Coming into this game they are averaging 405.8 total YPG (1st), 306.6 passing YPG (1st), 99.2 rushing YPG (27th), and 29.4 PPG (2nd). With RB’s Fournette and Giovani Bernard out, it is crucial that the Bucs find a back that can fill this role headed into the playoffs.

Tampa Bay’s defense will look to clean things up after allowing the Jets to rush for 150 yards last week. The defense overall has played well on the season but will need to kick it up a notch with the playoffs ahead. The Bucs D is allowing 332.4 total YPG (14th), 240.9 passing YPG (22nd), 91.4 rushing YPG (3rd), and 21 PPG (11th). They were able to sack Darnold seven times in their first matchup, so I would expect them to try and pressure him again this week. 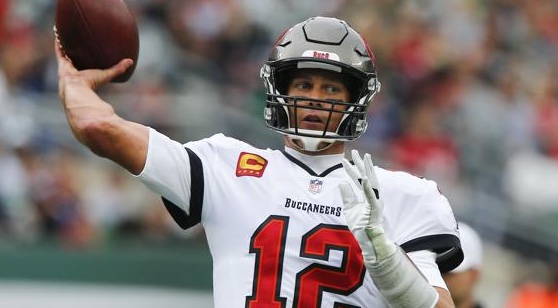 Tampa Bay has covered the spread in five of its last seven home games. (AP)

INSIDE THE STATS - CAROLINA PANTHERS

INSIDE THE STATS - TAMPA BAY BUCCANEERS

The total for the first game between these two teams closed at 44 and the total went under (38). This week the total is set for 41 and would have to lean towards the under but am not crazy about that number. As mentioned before, I do like the spread. Brady and the Bucs will be in search for the two seed which would give them two home playoff games. Breathe easy, lay the points, and back the Bucs at –8. Bettors should also keep an eye out for Rob Gronkowski total receiving yards. Gronkowski had 115 receiving yards last week and I think he will have another big game this week.