The Green Bay Packers (13-3) are road favorites in this week's matchup against the Detroit Lions (2-13-1). Kickoff is scheduled for 1:00 p.m. ET at Ford Field in Detroit, Michigan and can be viewed on FOX.

The Green Bay Packers clinched the NFC division last weekend after destroying the Vikings 37-10, giving them a first-round bye and home field advantage throughout the playoffs. There is a bit of confusion on how much playing time the starters will see this week having already clinched the NFC. However, on Friday head coach Matt LaFleur confirmed that Aaron Rodgers will be starting the game and will see how the game goes before pulling any starters. While some may think it’s unnecessary risk to play starters in a game like this, two weeks is a fair amount of time with no football.

Detroit has been hit hard with COVID and injuries the past few weeks but are hopeful that QB Jared Goff will return after missing the last two games. If he is not ready to go, former Packers QB Tim Boyle will get the start for the third straight week. Rookie WR Amon-Ra St. Brown has been great for the Lions as of late with at least eight catches in each of the last five games. The Lions have won their last two home games, including a quality 30-12 victory over the Cardinals.

With the uncertainty of how much the Packers starters will play and whether or not Jared Goff will be ready to go for the Lions, it's tough to have a good feel for the spread. There could be value in taking the Packers if you think Rodgers will get a fair amount of playing time. I personally think the playing the total is the way to go here. The first matchup between the two teams ended with a total of 52 points, so I think the over is a safe play. Given it’s being played in a dome and the Lions defense allows 27.3 PPG (30th), the over 44.5 should definitely be obtainable.

The Packers have won five straight games and scored 30 points or more in four of those games. Led by Rodgers, the offense has been a force to be reckoned with throughout the season. Entering week 18 Green Bay is averaging 364.8 total YPG (12th), 253.7 passing YPG (9th), 111.1 rushing YPG (19th), and 26.3 PPG (10th). It should be interesting to see what the game plan here is for Green Bay. We know for certain that Rodgers will be starting the game, but how much playing time him or any other starters will get is up in the air.

Goff is expected to start on Sunday after missing the past two weeks due to COVID and a knee injury. If he is not able to go, Tim Boyle will be the starter for the third straight week. Although the Lions have not been able to rattle off many victories, they have been competitive with eight of their games being decided by one score or less. Coming into their final game, Detroit is averaging 317.5 total YPG (22nd), 205.8 passing YPG (21st), 111.7 rushing YPG (18th), and 18 PPG (28th).

Detroit will more than likely focus the off-season on adding some pieces to the defense that has struggled for most the year. The Lion's defense is allowing 379.9 total YPG (28th), 244 passing YPG (25th), 135.9 rushing YPG (28th), and 27.3 PPG (30th). Detroit has forced 16 turnovers on the year (25th) while Green Bay has given the ball away only 10 times (1st). Unless Rodgers doesn’t see much playing time, I don’t expect Detroit to have any take aways in this one. 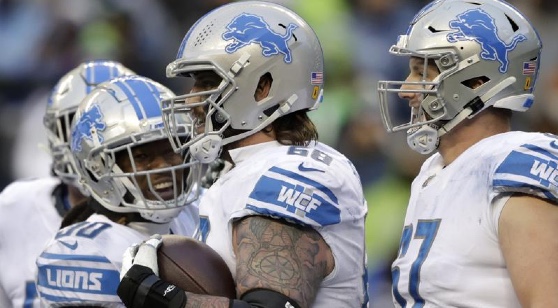 Detroit has covered the spread in five of its last seven home games. (AP)

INSIDE THE STATS - GREEN BAY PACKERS

INSIDE THE STATS - DETROIT LIONS

Regardless of what your play is in this one, be sure to keep an eye on both teams to try and get a better feel for who will be playing and for how much time. With the spread currently at Green Bay -3.5, it's safe to say that Vegas does not expect Rodgers to see much of the field on Sunday. LaFleur’s comments on Friday seems to contradict that but who knows what will happen. With all the uncertainty I’m not crazy about the spread and will be playing the over at 44.5.