The Indianapolis Colts (9-7) will look to secure a playoff spot in their final game of the season against the Jacksonville Jaguars (2-14). Kickoff is scheduled for 1:00 p.m. at TIAA Bank Field in Jacksonville, Florida and can be viewed on CBS.

After starting the season 1-4, the Colts now control their own destiny with an opportunity to clinch a playoff berth with a win on Sunday. This would be the third time in four years Indianapolis has reached the playoffs. While Jacksonville is an ideal matchup to clinch a playoff spot, the Colts have not won a game in Jacksonville since 2014. Andrew Luck, Trent Richardson, and Reggie Wayne were the stars of the team if that gives you a better idea of how long it has been.

The Jaguars have lost seven straight games and are more than ready to end the season. A win this week would potentially take away their number one pick, so I can't imagine guys are going to be risking it all for a meaningless win. Fans are also not happy with the organization and rightfully so. They are even planning on dressing in clown outfits to take a jab at the owner of the team, Shad Khan. The organization appears to be in complete shambles which does not give me confidence as a bettor.

The Colts have the playoffs on the line and Jaguar fans are so upset that they plan on dressing up as clowns to the game. I have to go against past trends in this one and side with the Colts in this one. While I am not entirely crazy about laying more than two scores, I think it is the best play in this matchup. Colts win, cover, see you in the playoffs.

Indianapolis has been more than kind to bettors with a 10-6 ATS record on the season, and even more so on the road going 6-1 ATS. The Colts are 5-0 ATS in their last five, but are 0-5 ATS in the last five when playing on the road against Jacksonville. The total has gone under in four of the Colts past five games. Going against this trend, the total has gone over in five of the last seven games for the Colts when playing on the road against Jacksonville.

The Colts will need to do what they do best in this one, and that is hand the ball off to the NFL’s leading rusher Jonathan Taylor. In the first meeting against Jacksonville Taylor rushed for 116 yards and a touchdown. This is a run first offense and are averaging 354.3 total YPG (15th), 201.4 passing YPG (23rd), 152.9 rushing YPG (2nd), and 27.5 PPG (7th). The run game should open up opportunities for Carson Wentz. Expect Wentz to have a better outing this week as he threw for just 180 yards and no touchdowns in the first matchup against the Jags.

The Colt's D has forced 33 turnovers on the year (T-1st) while the Jaguars have turned the ball over 29 times (32nd). Look for the Colts to make this a priority in this game as they were only able to force one turnover in the first game against Jacksonville. The rest of the defense ranks middle of the road compared to the rest of the NFL. Entering week 18 Indianapolis is allowing teams 344.8 total YPG (17th), 235.2 passing YPG (18th), 109.6 rushing YPG (12th), and 21.2 PPG (12th).

The Jaguars are an abysmal 4-12 ATS on the season and just 2-6 ATS at home. Jacksonville has seen success in the past when playing Indianapolis, with a 5-0 SU and ATS record in their last five games when playing at home against the Colts. They are also 11-1-1 ATS in their last 13 games against Indianapolis. The total has gone under in four of the last five home games for Jacksonville. In the first matchup against the Colts, the total closed at 48 and ended up going under with a final score of 40 combined points.

No one expected Jacksonville to be Super Bowl Champs this year, but I do think people expected a better record than 2-14. Rookie QB Trevor Lawrence has not lived up to expectations thus far, and former head coach Urban Meyer did not even last a full season. These are a just a couple of reasons why the Jaguars offense ranks so poorly. Jacksonville is averaging 304.6 total YPG (27th), 201.2 passing YPG (24th), 103.4 rushing YPG (23rd), and 14.2 PPG (32nd). The Jags will need to add more talent around Trevor Lawrence before this organization can be taken seriously. 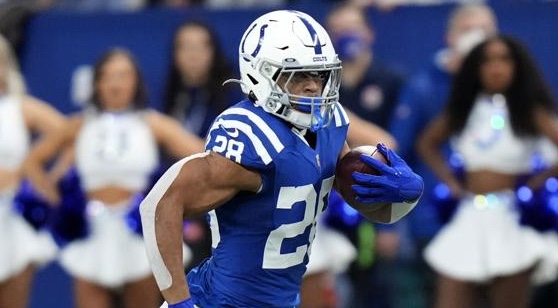 Indianapolis has covered the spread in six of its last seven road games. (AP)

INSIDE THE STATS - INDIANAPOLIS COLTS

INSIDE THE STATS - JACKSONVILLE JAGUARS

This is really a game of opposites. Indianapolis wins and they are headed to the playoffs, while the Jags have nothing left to play for. The total for this one is at 44 and I would have to lean towards the under simply because Jacksonville struggles to score the ball.

However, giving up 50 to the Patriots last week does not give me any kind of confidence in that bet. I think the spread is the best play in this game. I have to go against history and take the Colts to cover. While 15.5 is a bit high for my liking, it’s just too late into the season to be taking a risk on a team like the Jags.